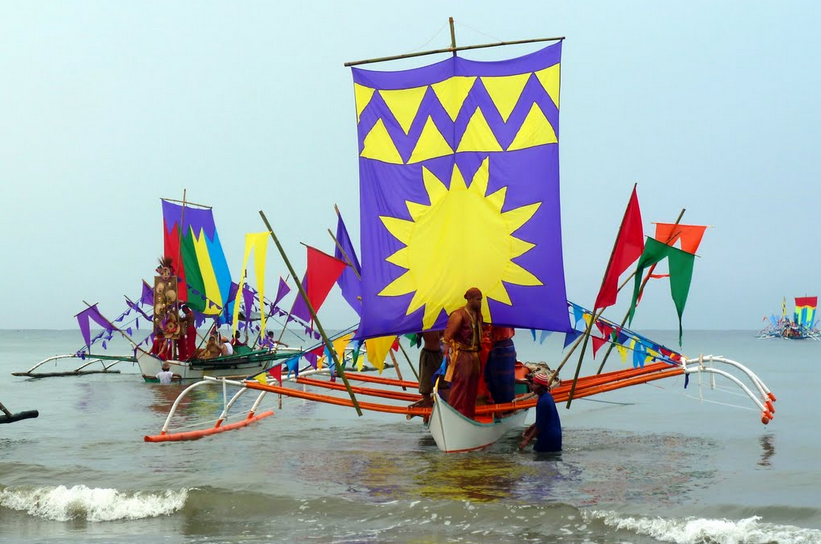 The days between March to April usually include the Holy Week celebrations in the Philippines. What this means is that during these months, most of the festivals being celebrated are religious in nature. Here’s a look at the five popular festivals that you can take part of during the month of April:

An annual festival held during Holy Week in Marinduque. The Moriones Festival is held in celebration of the life of Longinus, the Roman soldier who pierced Jesus Christ during the Crucifixion. His blind eye was spattered with blood from the wound and was healed on the spot. He later attested to the Resurrection but was executed when he refused to recant his statement.

The Moriones Festival re-enacts the part he played in the Crucifixion. It is an event marked by lots of color and highlights masked figures dressed as centurions who chase Longinus around.

“Morion” refers to the visor of the helmet worn by Roman soldiers. Hence, Moriones refers to the people who dress in costumes and put on these masks. Most of those who participate in this dress up and re-enactment call their act a penitence for any wrongdoing.

The event lasts for a week and ends on Easter Sunday where Longinus is beheaded.

This event is held in Mactan Island in the province of Cebu. It’s another festival based on a re-enactment of a historic event. It takes place every 27th of April, the date when the forces of Ferdinand Magellan met the army of Lapu-lapu which resulted in the death of the former.

The battle is a significant one in Philippine history because it showcased Filipinos fighting against foreign intrusion. Although just started as recently as 2012, Kadaugan sa Mactan has become part of the culture of Mactan Island.

Like most festivals in the Philippines, this one also lasts for an entire week with not only the re-enactment as the activity but street parties and other activities are also held.

Celebrated in Antique, a province in Western Visayas, “binirayan” means “where they sailed to.” As such, it is a celebration held to commemorate the arrival of ten Bornean datus on the island called Aninipay, which is now known as Panay.

The event is opened with a fluvial parade that starts at the port and ends at Malandog Beach in Hamtic, which is where the original settlement of the Bornean datus is said to be.

Other than the fluvial parade, beauty pageants, cultural shows, street dancing and exhibits of arts and crafts and local products are also staged.

This is a re-enactment of Christ’s Passion and Death and is held in Barangay San Pedro Cutud, San Fernando City, Pampanga. The event takes place during the Holy Week and involves a passion play which ends with the actual nailing on the cross of three penitents. While some re-enactments across the country use rope to crucify actors, this one does it for real.

Also called Pagtaltal sa Bala-an Bukid, this festival is another re-enactment of the Passion of Christ but this time in the Visayas region. Conducting stage plays is a big thing during Holy Week and one of them is the “pagtaltal” which means to remove. In other words, the play ends when Jesus Christ is brought down from the cross and laid in the arms of Mother Mary. A scene a lot of people are familiar called “Pieta.”

Participants who join this event have to walk 2 kilometers to complete the 14 Stations of the Cross which ends at Bala-an Bukid. There are many more festivals celebrated in the month of April in the Philippines, and these make up just a few of them. Then again, just like most festivals in the Philippines, most of those held during this month are religious in nature.