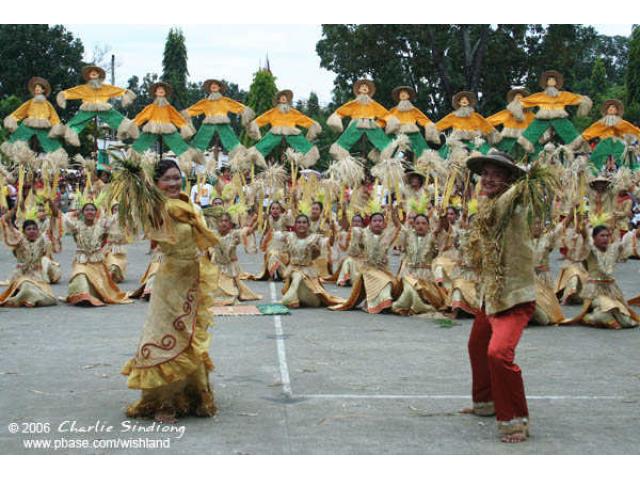 Yearly on the last weekend of April, the streets of Negros Oriental will roar with the abundance of life and entertainment as its locals and visitors dance together to the beat of thanksgiving. As a means to offer their gratitude for the blessings they have accumulated within the year, the locals make it to a point that their festival will definitely be remarkable!

As what the tourists who had ventured in our country said, “The Philippines is a country of fiestas”. Being a country filled mostly of Catholics, especially in Luzon and the Visayas, you will never leave a town without seeing a church or even a chapel. These religious establishments are structured with pure grandiose for they are dubbed as ‘the house of God’ and a home to a patron saint as well.

Such is Saint Vincent Ferrer the patron saint of Bindoy, Negros Oriental, and the reason behind the vibrant Libod Sayaw Festival!

Saint Vincent Ferrer is the patron saint of builders, construction workers, plumbers, fishermen and orphanages. He became the patron saint of builders because he had helped build the Catholic Church with his preaching and missions. He started his studies in theology and philosophy when he was fourteen, but even before that, he already displayed interest in caring for other people’s welfare as he often distributed alms to the poor when he was young.

That is why during the feast of this patron saint, the locals of the town of Bindoy make sure that the Libod Sayaw Festival is a celebration worthy of the saint who endlessly ‘guides’ and ‘watches over’ them.

With the alluring beat, the colourful costumes worn and the swift and bold movements by the participants who had months and months of practice to perfect the entire dance, the Libod Sayaw Festival comes to life!

The entire festival is held around the streets of the town center. This is where the festival got its name. The term libod means “to make the rounds” while sayaw is vernacular for English word “dance”. In other words, Libod Sayaw refers to the street dancing that will happen the entire day around the town center. The town center will surely be packed of spectators coming from different places. In order to be able to view the parade without obstruction, you have to come to the area as early as possible. Remember, you are not the only one who wishes to witness the dynamic dances, a lot of people are there to secure a front seat too! So if you want to have a favourable and comfortable viewing place, be there before the event starts.

Recently, the shallow and pristine Mantalip Reef became the subject of the Libod Sayaw Festival. The Mantalip Reef which also offers various water sports is a tourist destination known for snorkeling and scuba diving. The rate for the reservation of the Visitors Station in Mantalip Reef is P2500 and an entrance fee of P50 Php per guest is also required. This reef will leave you in awe with its rich marine biodiversity.

Complicated yet graceful choreography based on Philippine folk dances are being executed by the participants of the festival in order to showcase their understanding and appreciation of the reef’s importance to the town of Bindoy.

Air transportation from Manila heading to Dumaguete City via Philippine Airlines has two flights. The first flight leaves at 6:30 a.m. and arrives at 7:45 a.m. while second flight leaves at 1:00 pm and arrives at 2:15 p.m. Ticket fare ranges from P900-P2,000. Buses are available in the provincial capitol which will be heading to to San Carlos or Canlaon and the fare is P74. From Dumaguete, the travel time to arrive at Bindoy may take 1.5 hours if you are using public transportation and an hour if you have your own car.

If you wish to witness firsthand the depth of the Filipino faith combined with a showcase of talents and indigenous creativity, then get ready to join the fun in Libod Sayaw Festival of Bindoy, Negros Oriental!