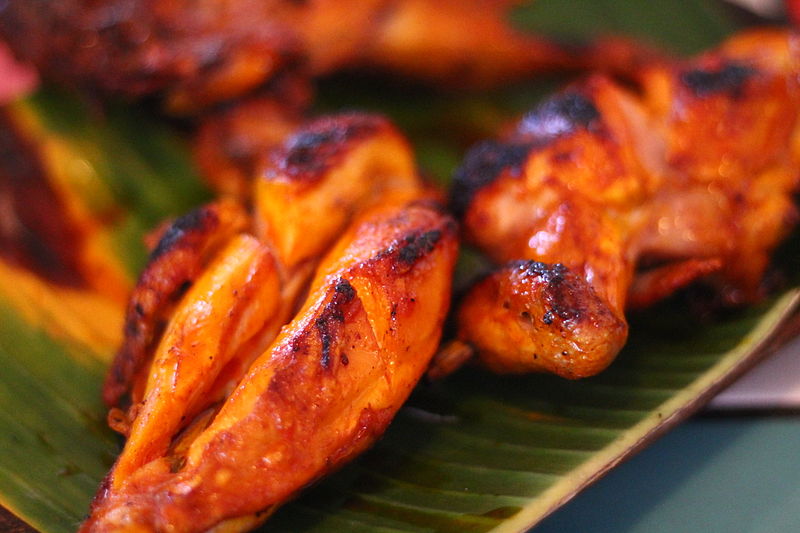 While mostly known for its Masskara Festival, Bacolod is more than just a party city – it’s also a food haven. People from the city are very particular about their food and they hold it to such high standards. That said, you’ll truly find a very rich food culture when you go around the city. And here’s a sample of the must-try dishes and delicacies:

When you ask someone what comes to their mind when Bacolod is mentioned, some would most likely tell you of this food staple. Just as sugar plantations are scattered all over Negros Occidental, so are chicken inasal restaurants and stalls in Bacolod. It’s practically the signature dish of the city.

Of course, where else can you enjoy the best chichen inasa than over at Manokan Country. While it’s not the best-looking of places, it’s undoubtedly one of the best places to eat and enjoy this wonderful dish. Basically, Manokan Country is a host of small eateries that all sell chicken inasal and the most popular of which are Aida’s Chicken and Nena Beth/Nena Rose.

For the best chicken inasal-eating experience, order it with garlic rice and dip it in sinamak vinegar, which is vinegar mixed with calamansi and chili. Other than chicken inasal, other Filipino food staples such as talaba (oysters), isol (chicken butt) and chicken skin are also sold.

But if you’d like to sample this dish from a more comfortable place, you can always head to the mall.

A lot of places in the Philippines are big into seafood, and that’s something that you get when in Bacolod. In the city, you have places called “pala-pala” where a variety of fresh seafood is put on display and you choose what you want and instruct them on how you want it cooked. So, basically, you can choose a good-looking fish and have them fry it. Or, if you’re new to this style of eating, you can always ask the one in charge what they would suggest for you.

Also spelled piyaya, this is one of the delicacies people from the Philippines mostly associate with Bacolod. It’s a flaky flat bread with dark muscovado sugar. The exterior is also sprinkled with sesame seeds to give it a nutty dimension. You can usually buy these in packs at pasalubong centers and you’ll also find it offered in ube flavor.

This is another one of Bacolod’s famous delicacies. It’s a layered puff pastry that is filled with custard cream and then glazed with white sugar on top. They are sold in small square sizes or larger rectangle sizes.

Napoleones, as its name suggests, is adapted from the French who did indeed bring some of their influence, especially in Negros Occidental. Two of the popular makers of this delicacy are Roli’s and Virgie’s.

Cakes are found everywhere in the Philippines, but your visit to Bacolod wouldn’t be complete without having tasted the fine cakes and sweets from their lovely pastry shops. Two of the most popular ones are Calea and Felicia’s. Whether you’re craving a cheesecake or moist chocolate cake, those two places are your destination for sinful delights. Whether you’re in town for the Masskara Festival or not, do try some of these Bacolod staples and see just how wonderful the food culture is in the city.

2 thoughts on “5 Must-Try Dishes and Delicacies in Bacolod”