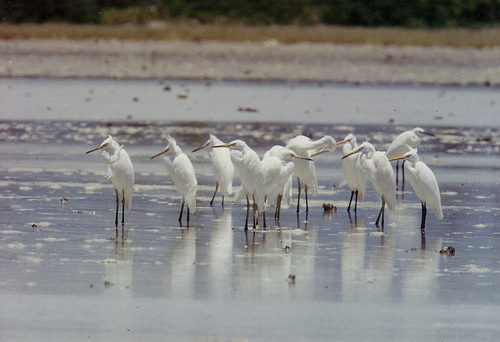 While observing birds endemic to the Philippines is satisfying, waiting for migratory birds to arrive just doubles the pleasure. So where are the best places in the country to spot a stunning array of winged creatures?

While the island may lack necessary facilities, it does provide a home for over 90 species of indigenous birds and more than 40 migratory species. The migrating birds use the island as a stop on their way to Australia.

Olango is a mangrove-heavy island with the months of October to November being the peak visiting season for birds headed to Australia. This is the best time to see the beautiful Chinese egret. The other peak season is from February to March which is the northward migration.

Among the species that can be viewed on the island include Asiatic dowitchers, plovers and night herons.

The river is just one of the places to see birds in Palawan, the others being the Rasa Island Wildlife Sanctuary where about 104 species can be seen including the Grey Imperial Pigeon, Philippine Red-Vented Cockatoo and Mantanani Scops Owl; and Lake Manguao where 126 birds have been observed including the Ashy-Headed Babbler, Grey-Cheeked Bulbul and Oriental Dward Kingfisher.

The river, on the other hand, is host to about 195 bird species and is one of the best places to see the Palawan Peacock Pheasant as well as the Palawan Hornbill.

Although not easily accessible, seeing the collection of bird species in this area is worth the difficult travel. You can visit the wetlands from October to November to see an array of migratory birds including the Chinese Pond Heron and the Purple Swamphen. Of course, not to be forgotten are the local wild ducks or Philippine mallard whose status has been listed as critical.

This is the place to be if you want to find the Philippine Eagle in its natural habitat. Other species that can be found here include the Bukidnon Woodcock, the Apo Myna and the Blue Capped Wood Kingfisher. Although there are established trails up the mountain, the trek can be quite challenging but the views and wildlife are rewarding.

While the Philippines may be known for the wealth of beautiful beaches that line its shores, there are other occupants of nature worth seeing as well. Of the 600 creatures that frequent the islands, about 200 are endemic to the country. While you may not see all hundred species at once, there’s an appeal to waiting patiently for them to arrive. Seeing these birds also gives you an appreciation of wildlife and will hopefully spark an interest in helping do your part to make sure the next generation still gets to see these creatures.