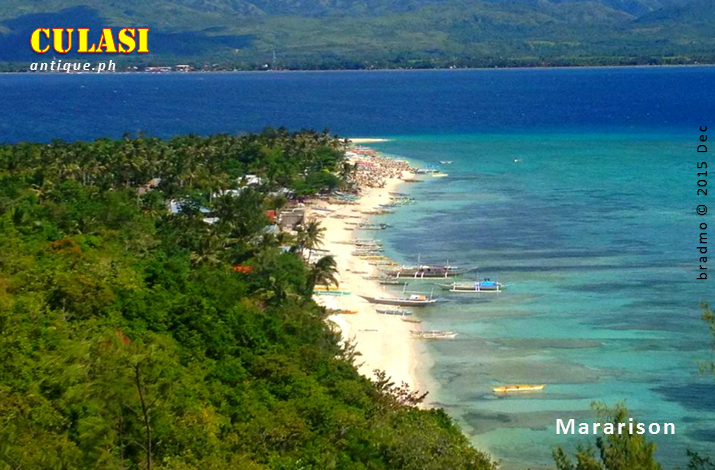 The province of Antique has many wonders to look forward to. One of them is Culasi, a third-class municipality, which is 92 km north of San Jose de Buenavista, the province’s capital. It is also 90 km south of Kalibo, the capital of Aklan.

The municipality of Culasi was known as ‘Bacong’ in the Spanish era. This was once part of the four vistas or towns built by the Spaniards. The term Culasi has been derived from the vernacular term for Lumnitzera racemose, a species of mangrove, growing abundantly along the river basin of the vicinity. The Culasinhon or the locals depend on fishing and farming as their major source of income.

The island of Antique has a lot to offer to local and foreign tourists. One of them is the tropical Island of Malalison. This place is around 15-20 minutes away from the mainland along the municipality of Culasi. It forms as a long sandbar greeting its visitors to the marvelous island community.

Local folklore has it that Malalison has been known as one of the 3 islands considered to be the banished daughters of Mt. Madjaas, the highest peak in Panay island rising over 2,000 meters overlooking the 3 islands that comprise Culasi.

Batbatan is one of the 3 islands that comprise the municipality of Culasi. This is the second largest of the three landmarks. It will take only one hour from the mainland via banca or motorized boat. If you plan to go there, the best time is during the summer. When you look for an island that is clean and unspoiled, then you should come and visit the place. It will also offer rock climbing adventures for the whole family to enjoy. Even the sands are a great location for walking barefooted. Diving and snorkeling are also among the major options that you can enjoy within this tiny island.

If you like get away from it all and venture into the mountains, then Mt. Madjaas is the place to be. Revered in local tradition and culture, this piece of land is considered the highest in Panay, which makes Antique a very interesting place for climbing. The name Madjaas locally means tall or lofty in stature, which should provide tourists with an overwhelming view of Western Panay island and its surrounding body of water. When you are in Culasi, you just need to be in Barangay Flores which is just within the municipality.

On the Western part of the Visayas is where Antique can be found. There are 2 options for you to consider. First is via Iloilo, which you can get direct flights from major airlines in the Philippines. Get about an hour of travel from Metro Manila and then another couple of hours by jeepney to Antique. Second option is via Aklan as it will only take about an hour of travel from Metro Manila. However, it will require a tricycle to go to the Kalibo bus terminal and ride on to Antique aboard a Ceres bus.