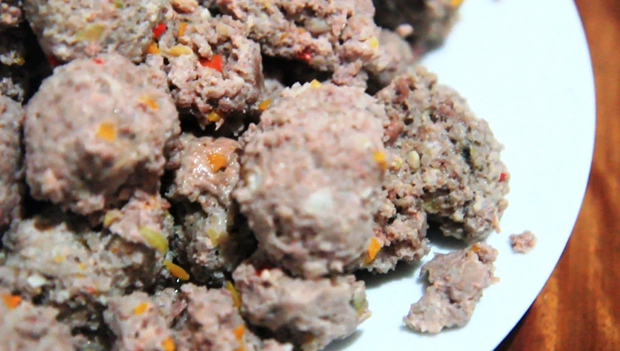 Batanes might be remote but that doesn’t stop travelers from wanting to explore the province. While flights are available, they are mighty expensive (at least on the side of local tourists). But the scenery and cool weather can be very rewarding. And while you’re in town, why not try the different dishes and food items Batanes has to offer? You might as well try anything and everything to get the full experience.

You might not find a banana pith appetizing but see what happens when it’s cooked together with fish flakes and minced pork. Yes, it still might not be a mouthwatering combination for most but it’s a traditional dish in the province and part of the Ivatan cuisine. The Ivatans are an ethnic group with an interesting history and an equally interesting culture.

This is basically lobster and it’s what you can order as an alternative to coconut crabs or tatus. While tatus remains served in a number of restaurants on the island, the species is actually listed as endangered. These crabs get their name from being able to pry open a coconut shell. While that may be impressive, they actually need days before they can do so. Then again, another impressive feat they can do is get up a coconut tree to hack off its fruit with its pincers.

Yes, coconut crabs may be delicious but given that they are a threatened species, we can do our part by not ordering dishes that may contain them. This is tough to ask but we also need to do our part to ensure that they don’t get eradicated by our greed.

This fish – flying fish – is quite popular in Batanes. In fact, it figures into many of the dishes on the island. They can be fried and served with breakfast or they can be incorporated into a fried lumpia (it’s essentially lumpia but with dibang in it instead of the usual pork). Dibang can also be put in a sinigang or smoked.

Many other cuisines around the Philippines feature seaweed, mostly as a salad. There’s lato (sea grapes) and guso and both can be prepared with just vinegar and salt with a bit of tomato and onion. But in Batanes, seaweed is turned into soup and is actually a part of the Ivatan diet.

Another seaweed dish you can try on the island are their seaweed balls.

This is made from a combination of tuge, a local root crop, as well as milk and cream.

You can try these food items in the different restaurants in Batanes, which have grown thanks in part to the increased travel demands to the island. Accommodation options have increased over the years as well.

So whether you’re local or have crossed the ocean to get to Batanes, do yourself a favor and savor the food staples of the island. Feasting on the local cuisine is a good way to experience the culture of a place and it will leave you with much more lasting memories.