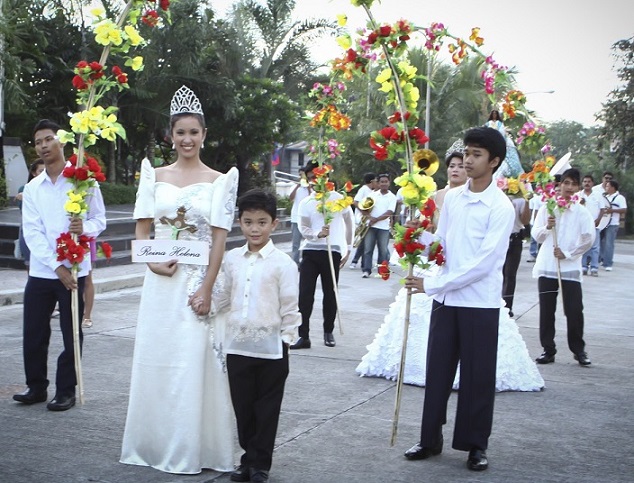 Celebrated across the Philippines in the month of May, Flores de Mayo (Flowers of May) is an event dedicated to the Blessed Virgin Mary. The notable feature of the festivities is the Santacruzan, which is a pageant held on the last day of celebrations in honor of the finding of the True Cross in Jerusalem by Helena of Constantinople (Reyna Elena) and Constantine the Great.

The month of May in the Philippines brings an abundance of flowers and greens and that is used to full effect during the festivities, particularly during Santacruzan.

Around 324 AD, St Helena, the mother of Constantine the Great, at the age of 75, went to Calvary to search for the cross that Jesus was crucified in. Diggings were made at the site of the crucifixion and three crosses were unearthed.

In order to determine which of the crosses belonged to Jesus, Helena had a sick servant lie down on all three. The servant was cured after lying in one of the crosses and so that one was declared as Christ’s cross.

The Filipino tradition celebrated to this day was introduced by the Spaniards when they conquered the country. Although today, Flores de Mayo is most remembered as a beauty pageant rather than its religious history.

Just like any other festivity across the country, Flores de Mayo features various excitement and thrills. Then again, what most people look forward to is the parade of lovely ladies and their escorts. Over the years, it has become a stage where one can witness beautiful ladies garbed in the most glamorous gowns.

But before the grand parade of beauties, more religious events take place like the nine-day novena of prayers and offering to the Virgin Mary. Young children are also treated to pinawa (goodies distributed to participants) or pabitin (trellis decked with goodies and toys which is brought up and down for kids to grab).

This is a parade that involves ladies and gentlemen dressed as various biblical characters. Of course, the most coveted part is that of Queen Helena or locally known as Reyna Elena. Although this event is celebrated differently across the country, these characters are who you’ll most likely see:

Metusalem (Methuselah) – bearded, bent with age and riding a cart, he serves as a reminder that all that glitters will soon fade.

Reyna Banderada – she represents the coming of Christianity and is dressed in red and carries a yellow triangular flag.

Aetas – represents the country before the coming of Christianity.

Reyna Fe – she carries a cross and is the symbol of faith, the first theological virtue.

Reyna Esperanza – she carries an anchor and symbolizes the second theological virtue, hope.

Reyna Caridad – she carries a red heart and is the symbol of charity, the third theological virtue.

Reyna Abogada – dressed in a black cap and gown, she is the defender of the poor and oppressed and carries a big book.

Reyna Sentenciada – accompanied by two Roman soldiers, she represents the innocents who have been convicted; she has her hands bound by rope.

Reyna Justicia – carries a weighing scale and a sword; she personifies the mirror of justice.

Reyna Judith – represents Judith of Pethulia who saved her city from the Assyrians when she beheaded Holoferns. In the festival, she carries the representation of Holofern’s head on one hand and a sword on the other.

Reyna Sheba – visited King Solomon only to be overwhelmed by his wisdom, power and riches. She carries a jewelry box.

Reyna Esther – spared her countrymen from death together with the intervention of King Xerxes. She carries a scepter.

Samaritana – she represents the woman who Christ spoke to at the well. She carries a jug on her shoulder.

Veronica – she wiped the face of Jesus and in the parade carries a bandana with the three faces of Jesus.

Mary of Magdala – carries a bottle of perfume

Mary, Mother of James – carries a bottle of oil

Marian – these represent the many titles of the Virgin Mary

Reyna Paz (Queen of Peace) – carries the symbol of peace

Reyna Elena (Queen Elena) – carries a small cross and is escorted by Constantine, her son.