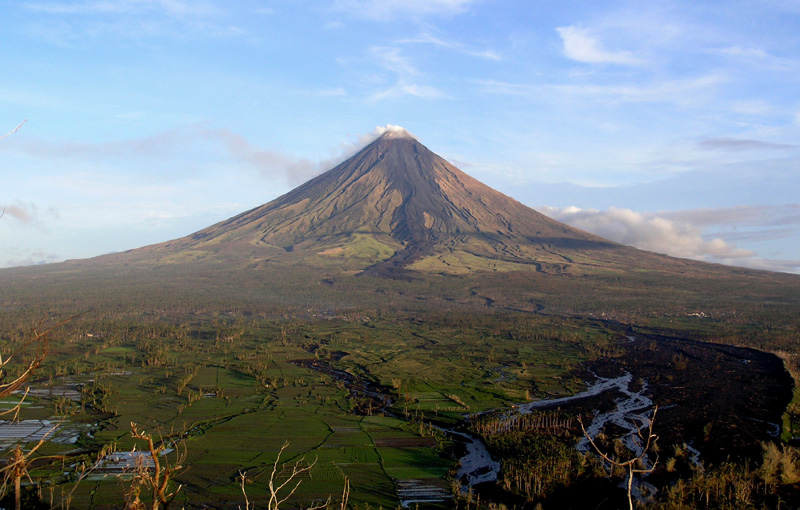 The Philippines is home to 53 active volcanoes, and the country belongs to the Pacific Ring of Fire, where the oceanic Philippine plate and several smaller micro-plates are subducting along the Philippine Trench to the east and other small trenches to the west. With this in mind, it is no doubt that the country is visited by travelers who love to see the grandeur of these marvelous natural formations. When you are planning a visit here, you should not miss out visiting the most famous volcanoes, active and inactive, in the country. Here is the list in any order:

This is an active volcano in Luzon with a three-peaked complex that is located between the provinces of Quezon and Laguna. It is the tallest mountain in the CALABARZON region, dominating the landscape for miles around. It is considered by many as a “holy mountain”, which is why it is popular among pilgrims, aside from mountain climbers. Banahaw has been a protected area and a national park since 1941, and now, it is called Mount Banahaw-San Cristobal Protected Landscape, which covers 10,901 hectares of land.

Also known as Catarman Volcano, Mount Hibok-Hibok is located on the beautiful Camiguin Island and is classified by volcanologists as a strato-volcano for its dome complex. It has an elevation of 1,332 meters and a base diameter of 10 kilometers. Its feats that attract visitors include 6 hot springs and 3 craters.

Also spelled as Kanla-on or Canlaon, this is an active strato-volcano that straddles the provinces of Negros Oriental and Negros Occidental. It is located approximately 30 kilometers southeast of Bacolod City, which is the most populous city and the capital Negros Occidental. As the centerpiece of the Mt. Kanlaon Natural Park, the volcano is a favorite spot for mountain climbers. Part of the Pacific Ring of Fire, it is one of the most active volcanoes in the country.

The Mayon Volcano is renowned as the “perfect cone” due to its almost symmetric conical shape. It was declared a protected landscape and a national park in 1938, which is the first in the country. It was then reclassified a natural park and renamed Mayon Volcano Natural Park in 2000.

Local folklore refers to the mountain as being named after the legendary heroine Daragang Magayon, which translates “beautiful lady” in English.

This is an active strato-volcano in the Cabusilan Mountains, near the tri-point of the provinces of Zambales, Pampanga and Tarlac. Before the volcano’s activities in 1991, its eruptive history was unknown to most people because it was heavily eroded, obscured from view and inconspicuous. It was covered with dense forest that supported several thousands of indigenous people, the Aetas, who fled to the mountains during the Spain’s conquest of the country.

A complex volcano, it is recorded as the second most active in the country with 33 historical eruptions, which are concentrated on the volcano island near the middle of Taal Lake. When you view it from Tagaytay Ridge, it presents one of the most picturesque and attractive views in the country.

By visiting these volcanoes, you will certainly know why “It’s More Fun in the Philippines”. Have fun and stay safe!