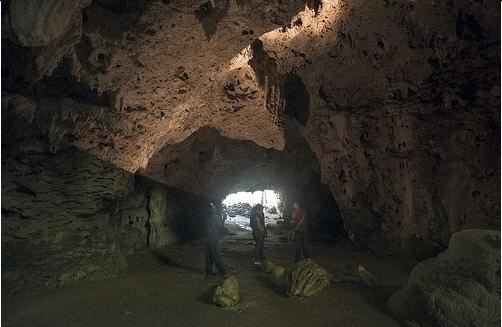 Located in the foothills of the Sierra Madre Mountain Range, specifically in the province of Isabela, Cagayan Valley, the Santa Victoria Caves are comprised of more than 12 limestone caves that are known for their unusual but beautiful rock formations, their subterranean waterfalls and their sparkling rocks. These caves also have archaeological significance, as they are believed to be once the home to the nomadic Dumagat or Agta people in the past. They are part of the 200-hectare Isabela Sanctuary, which is also part of the Fuyot Springs National Park (FSNP).

These caves are found together with a wildlife sanctuary, waterfalls and botanical garden in the Isabela Sanctuary, forming about a 25% of the FSNP. Part of the municipality of Ilagan, they are just 15 kilometers away from the town proper.

The local indigenous and nomadic group of people, known as the Dumagats or Agtas, is believed to have used the Santa Victoria Caves as shelter at some point in the past. Today, the area where the caves are located is being frequented by spelunkers and small game hunters, and kaingin (a farming method that uses the burning of plants and trees) has grown rampant in the areas that surround the caves. In trying to preserve this beautiful place, it has been undergoing certain improvements under the oversight of Isabela’s local government. The area covered by the FSNP, which includes the caves, several rivers and forests, is now protected as a sanctuary.

The Santa Victoria Caves are known for their distinctive geological features. First, they are popular for their sparkling rocks, which catch the interest of tourists, and their naturally-formed lattices. Also, these caves have underground waterfalls, including the Pinzal Falls, which is conducive for swimming. Moreover, you will find other recreational facilities, such as horseback riding and riding on carabao-drawn carts, in the surrounding areas.

For the pleasure and comfort of tourists, new facilities were developed in the Isabela Sanctuary, aside from those that offer cave exploration. It now has a place where you can see endangered species and a botanical garden. As a tourist, you will be offered the chance to go on cycling, white-water rafting, trekking and mountain climbing throughout the area. As previously mentioned, you can also go on swimming in the basin of the Pinzal Falls within one of the caves.

Most of these developments were completed in the early 2009 through the initiative of Ilagan Mayor Jose Marie L. Diaz. Under the program, 28 non-government organizations that are locally based signed a memorandum of agreement, where they pledged to take responsibility for the sanctuary’s protection, maintenance and preservation. Other government and national agencies were also rallied to help with the place’s conservation.

Aside from these things, the sanctuary also offers an environmental school, where you can listen to lectures, receive certificates and get seedlings to plant.

Isabela is about 405 kilometers north of Metro Manila. The junction to the Ilagan Sanctuary is situated along the National Highway at Barangay San Andres, which is 6 kilometers north of the city center. You can take a ride on a northbound bus, a jeepney or a van and alight at the junction, where you can then hire a tricycle to take you to the sanctuary.