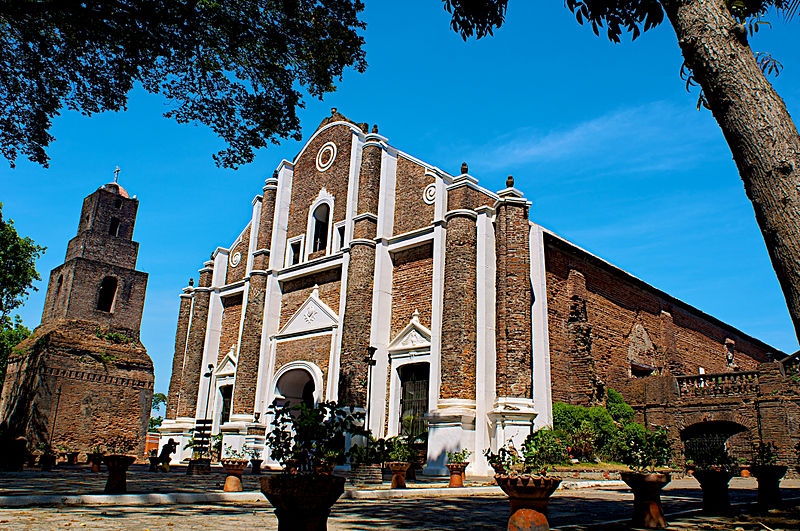 There are many sights to behold in Ilocos Norte. Be it nature or architecture, you’ll definitely be visually spoiled when you set foot in this northern province. And one of the visual gems of the province is located in Sarrat (located southeast of the provincial capital of Laoag City): the Santa Monica Church and Convent.

Sarrat is best known as the birthplace of the 10th President of the Philippines, Ferdinand Marcos. The church even gained fame when Marcos’ daughter Irene chose the church as the venue for her wedding in 1983. And just recently, the church was used in the biopic Heneral Luna (which is the Philippines’ foreign language entry for the 2016 Oscars).

The Santa Monica Church has been declared an Important Cultural Property of the Philippines. But that’s not the only thing making it worth the long trip: it’s also set in quite the picturesque location. The church fronts the Padsan River and is surrounded by trees which lends a cool and breezy atmosphere.

Visually, the Santa Monica Church is stunning. The size itself is massive, and in fact, it is the biggest one in Ilocos Norte and maybe even the Ilocos region. Red bricks were used to build the church and it’s done in Earthquake Baroque and Neoclassical architecture.

Fourteen Stations of the Cross are found around the church, and these sculptures are made of brick.

The Casa del Palacio Real or the convent is also a survivor of two fires: one in March 1816 and the other in October 1892. The convent served as the Presidencia Municipal or town hall. A parish museum and gallery can be found in the ground floor of the convent.

The church of Santa Monica was constructed in 1724 by the Augustinians. The convent was added in 1769 to serve as a temporary chapel. The belfry and curillo (bridge staircase that connects the church to the convent) were built in 1779.

The Santa Monica Church has survived many tough times. The year 1816 saw it destroyed and reconstructed in 1817. The church is also a survivor of a fire that happened in 1882. A few months after the wedding of Irene Marcos, the church suffered damages due to a intensity 7 earthquake. The church suffered major structural damage, particularly in the facade, and although a reconstruction was undertaken to repair it, there still remains traces of the event.

While the church is a wonderful sight in itself, there are other delights located in and around the church complex. One, you can take time viewing the 14 Stations of the Cross in the church grounds. Two, you can visit the convent and have a look at the museum in its ground floor.

The Sarrat Central School is located beside the convent. As a resident of Sarrat, this is where President Ferdinand E. Marcos attended grade school. Also, the school was once used as the casa real of Ilocos Norte as Sarrat once served as the capital of the province during the Spanish occupation.

Also located close by is the Edralin House or the birthplace of Ferdinand E. Marcos. When he became president of the Philippines, the house underwent a heavy renovation. Now, it has a small museum.

You can either book a flight to Laoag City or take a bus (a much longer trip, around 10-12 hours). From Laoag, you can take public transportation to get you to Sarrat, which is about 30 minutes away.

The Santa Monica Church gives you a glimpse of the architectural beauties that the Spaniards left behind, not just in Sarrat but all over the country.