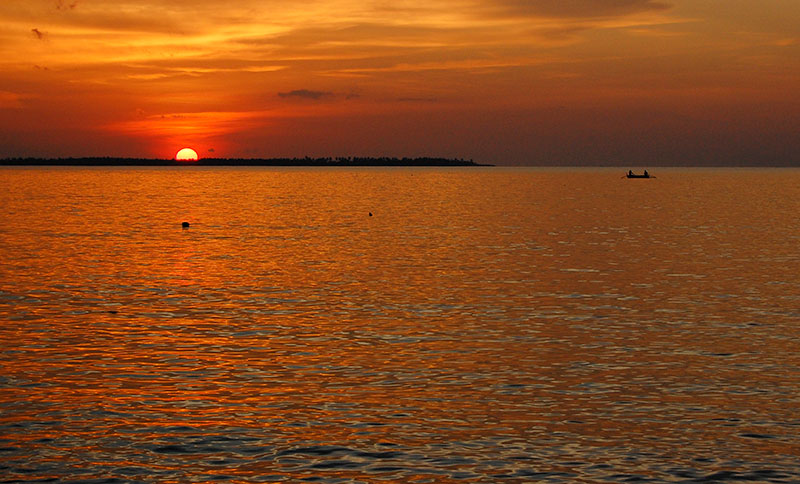 Laoang is a 2nd-income class municipality situated in Northern Samar, Philippines, specifically lying on the eastern side of the province. It is bordered in the east by Palapag, in the west by Pambujan, in the south by Catubig and in the north by the Philippine Sea. It is geographically divided into 3 distinct areas, namely the lowlands of mainland Samar Island, Laoang Island and the Batag Island, which forms as a natural barrier for waters of the Pacific Ocean. The municipality is the socio-cultural, economic, political and educational center of the province’s 2nd Congressional District.

Among the many attractions in Laoang, there are those that you should not miss, such as the following:

Officially known as the St. Michael the Archangel Parish Church, Laoang Church is the center of Catholic faith on Laoang Island. Except for the bell tower, this building, especially its façade, really looks old and historical, with the most prominent feature being its massive triangular gable that takes almost half of the space, holding 2 central arch niches with statues of St. Michael the Archangel. It is also here where you will find the Almuraya Fortress.

With “onay” as the local term for suicide, legend tells that a tragic love story ended at this beach, which is deemed by locals as a place where someone killed herself. However, as grim as it is, this moniker did not stop people from flocking to the place, and actually, it is the most popular swimming destination on the island. Having a glowing mixture of white, black and brown sand, this beach reflects the afternoon sun and glitters as if its sand is golden.

This farm will provide you with a relaxed atmosphere, where you can lay back looking at the bay that adjoins the Pacific Ocean and listening to the sound of the waves. Here, you can bond with nature easily and enjoy the panoramic view of Batag Island. You will also experience a beautiful sunrise on this side of the province.

Several festivities are celebrated in Laoang throughout the year, including the Feast of Sto. Niño the 4th Sunday of January, Flores De Mayo in May and the town’s fiesta in September in honor of its patron St. Michael the Archangel. As for the delicacies here, one of the most popular local dishes is shark meat, which is popularly prepared as “kinilaw”, which means raw. Though this type of meat may smell putrid, people in Northern Samar are able to have perfected a technique of cleaning the meat and getting rid of its smell. Aside from shark meat dishes, there are also other delicious food specialties here, which mainly consist of seafood like grilled tuna, crab on stick, “sinigang na bangus”. You can also taste the popular Filipino food, chicken adobo, with a tender twist by Northern Samar people.

When you are visiting Laoang, make sure you explore all places of interest that the town is known for. Given its numerous beaches, you can also spend some relaxing time in one of them and enjoy the fresh ocean breeze and the sun.

From Manila, take the flight to Catarman Airport in Northern Samar, and from here, take a tricycle to the bus station, where you will find jeepneys that will take you to Laoang.