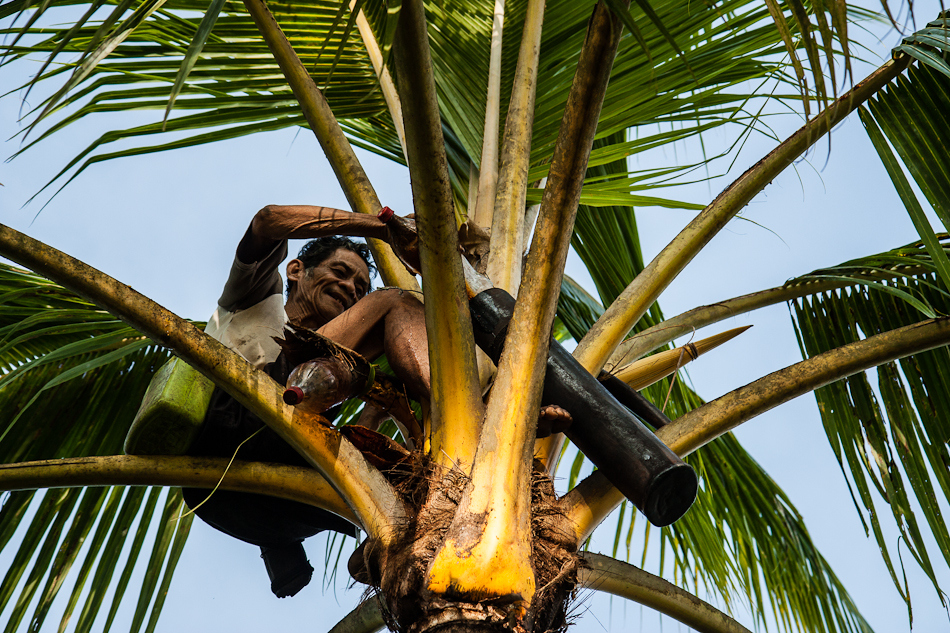 The Philippines is such a diverse country that when it comes to food, you’ll see striking differences even when the dish is the same. The same thing goes when talking about tuba or otherwise known as palm wine, coconut wine and palm toddy. So, if you have a thirst for this alcoholic beverage, the first thing you want to know is where to find it, right?

Then again, that question is quite the tricky one to answer given that there are more then 7,000 islands in the Philippines with regions that have a distinct way of doing things. So, in order to answer the question of where can the best tuba be found, it’s a good idea to take a look into the different tuba making practices in the Philippines.

Tuba Making in the Philippines

The making of tuba starts with someone called the manangguete (in Visayas and Mindanao) or the mangagarit (in southern Luzon). In other words, he is the tuba gatherer and he climbs up a coconut tree in hopes of finding a newly sprouting coconut flower still encased in a green pod, known as its takong.

The bud of the coconut fruit is cut off using a scythe so that the sap can seep out of the bud. The stalk is then pushed down so that it would be easier to collect the dripping juice.

The tip is then put into a container and fastened with coconut sheath and tightened with a strip of rattan. This is done so no rainwater can contaminate the collected sap. Sometimes, straw string and plastic cellophane make do instead of sheath and rattan.

It is left in this condition for an entire day to completely collect the juice from the coconut.

In Quezon, Laguna and Bulacan, tuba comes in a milky white variety. This is because the tuba gatherer serves this pure. Then again, this has to be consumed a day or two after being harvested because the tuba becomes sour (transitioned to become vinegar) beyond that.

In the Visayas and Mindano, you’ll see a tuba with a slightly different shade – red or maroon. This is because of the addition of pounded or ground bark of tungog or otherwise known as barok. This element helps the coconut wine ferment and prevents the tuba from turning sour.

So, wherever you are in the Philippines, don’t be surprised if you’re served a tuba that is white or red because it depends on where you are and the process involved in making it. Some like it white and others prefer it red.

Either way, it gives you that alcoholic high you’ve always wanted.

The Differences Between the Tubas

The Luzon variety tends to be more sweet. It’s not that those in Luzon don’t want to make theirs red but its just the availability of tungog that leads them to serve their tuba white.

Tuba from Leyte usually tastes butter compared to other places in the Visayas and Mindanao because they tend to add more tungog in the mix.

Also, when tuba is fermented for a month, it’s now called bahalina or aged coconut red wine. Just like any other wine, it tastes better as it gets older.

Where then can you find the best tuba in the Philippines?

The answer depends on how you want your tuba. Do you want it fresh? If that is the case, then provinces in Luzon will be able to provide exactly what you need. In case you want the reddish version, then coming to the islands in the Visayas and Mindanao are your best bets.

In fact, the best source for tuba is heading to the provinces because you can see how the process is done and you can see bottles and bottles of liquid fermenting and waiting for consumption. All you have to do is ask, and Filipinos will gladly show you where you can get tuba.

2 thoughts on “Where to Find the Best Tuba in the Philippines?”