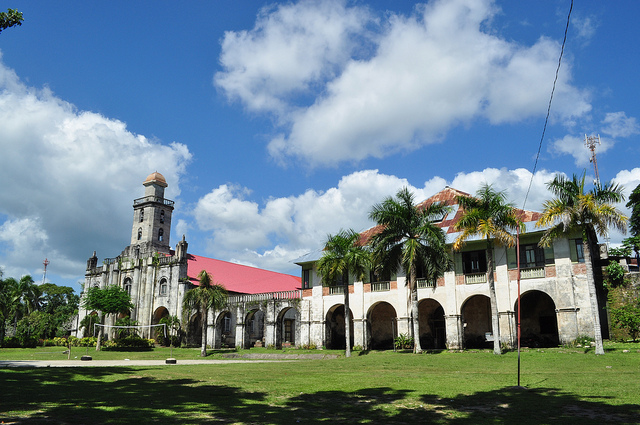 Bohol is home to a distinguished breed of Catholic churches dating back to the Spanish colonial regime. Four of them – Baclayon, Loboc, Loon, and Maribojoc – have significant importance to the history and culture of the Boholanos and the Filipinos in general.

Sadly, many of these centuries-old churches were badly damaged by a massive 7.2 magnitude earthquake on October 15, 2013. Some were reduced to a pile of rubble and bricks, but renovation and reconstruction projects are underway.

The parish church of Alburquerque, inaugurated in 1869, is old and iconic but wasn’t badly damaged during the earthquake. It is one of the country’s National Historical Landmarks.

The church of Antequera could’ve been 120 years old had it been completed right away. Construction was started in 1896, but was stopped during the war in 1898. The church was finally completed in 1914, a neoclassical structure with the famous belfry at the left side of the temple.

One of the oldest in the country, the Jesuit church of Baclayon, completed in 1727, was a masterpiece of some 200 forced native workers who made bricks out of coral stones cemented together with egg whites. The church has a dungeon where alleged heretic natives were imprisoned and punished. Most of the church collapsed to the ground during the earthquake.

The parish of Candijay was established in 1879 by the Recollects. The concrete church is of neogothic architecture with a portico at the front and idyllic tower and windows.

The church of Clarin was a beauty to behold, but was destroyed by the great quake in 2013. Only its façade and bell tower were left standing.

The original Corella church was finished in 1886 with a convent and two stone school structures. It fell into disrepair and was replaced with a new one in 1924. Although the church complex did not fell down during the earthquake, it received major damages including huge cracks on the arched ceilings, beams, walls, columns, as well as damaged exteriors.

The Cortes church is also iconic in that the bell tower is on the left portion of the structure. The Recollects had initially built a church in Cortes around 1880, but the bell towers were completed only during the 20th century. The structure has a cruciform shape with an octagonal crossing tower, floral accentuated doorway with a ceiling decorated by painting artworks of Ray Francia. It features carved columns and flanges, and a portico at the entrance. The upper walls of the church were in ruins during the 2013 Bohol earthquake.

The Roman Catholic Church of Dauis is one of the most stunning old churches in the Philippines. It’s the iconic Catholic church near the bridge that connects Bohol mainland to Panglao Island. It features Byzantine and Romanesque architectural influences with a ceiling filled with stunning fresco paintings done by Ray Francia in 1916. The century-old church was finished in 1863 and renovated in 1970, but the main church building collapsed with only the belfry and back portions of the church remained standing.

The parish church of Dimiao is a massive architecture, noticeable by any wandering tourist. Situated in an expansive front yard, the church features two huge octagonal steeples and a colossal stone façade with intricate floral reliefs. The earthquake in 2013 did not bring the church down entirely, but left various areas of the church with cracks and displacements, rendering the structure unsafe with the ceiling likely to collapse sooner or later.

The neo-classical styled church in Duero is largely made of wood, from its ceilings down to its floors. It was completed in 1874, and remains one of the most unique churches in the country. The altar however underwent a renovation in 2012, a year before the earthquake, which substantially altered its all-wood design.