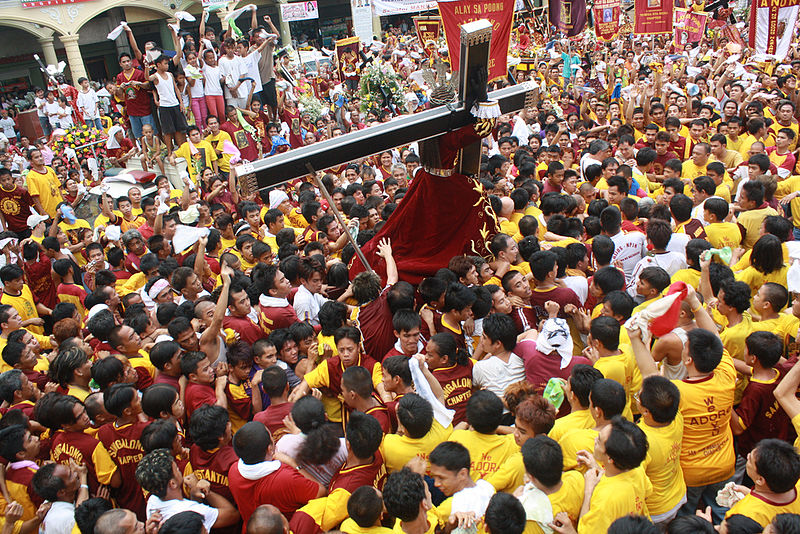 Devotees believe the power and miracles of the Black Nazarene, and flock to the Quiapo Church to join in the procession that brings the statue from Luneta or Rizal Park to the Church. Pilgrims would walk barefoot as a sign of sharing the suffering of Christ.

The Black Nazarene (aka Nuestro Padre Jesus Nazareno or Poong Itim na Nazareno) originally came from Mexico – a masterpiece of an Aztec wood sculptor. The wooden icon features a life-sized, dark version of Christ. It first arrived in Luneta, and later enshrined in Minor Basilica of the Black Nazarene in Quiapo.

According to the Roman Catholics, the statue was on board a boat that caught fire, which caused it to turn black. But because of its miraculous powers, the Black Nazarene did not burn and survived the fire.

However, a close inspection of the icon revealed that its dark color comes from the material used for the carving, which is mesquite wood. This falsifies the claims that the Nazarene caught fire but did not burn.

The Black Nazarene is moved out of its shrine three times in a year, on New Year’s Day, Good Friday, and on the Feast Day called Traslacion (passage or transfer). The Traslacion attracts thousands of pilgrims, and the crowd gets overwhelming to the point of breaking into a stampede.

Still, devotees do not mind the crowd, the heat, the noise, and the sacrifice, but endure them all just to be a part of the celebration with the hope of getting answered prayers. Devotees honor the Nazarene by clapping their hands after every mass, and by touching the icon or rubbing it with cloth to obtain a miracle of healing.

Quiapo offers an array of accommodations to choose from. The nearest hotels to the Church include Lido de Paris Hotel, Hotel Sogo, Astrotel, Hotel 99 Quiapo, and Citystate Hotel. There are also plenty of inns in the area such as Longstreet Inn, Cosmo Hotel Drive Inn, and the Corporate Inn Hotel. Since the Feast is a peak season for tourists, it is best to book a room in advance.

Aside from joining the festivities, tourists may engage in sightseeing nearby attractions such as neighboring churches, Rizal Shrine, Intramuros, Fort Santiago, National Art Gallery, Rizal Park, and the Presidential Museum and Library. There are also shopping options in Quiapo – one of which is the popular cheap strip in Divisoria. Tourists may also try looking at the slum life in Manila by taking a Smokey Tour.