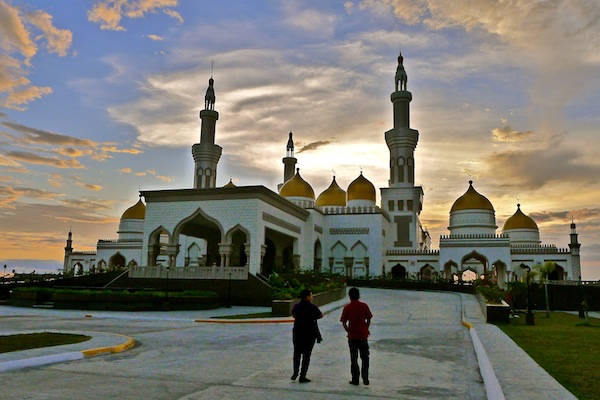 Cotabato City. The mere mention of the name can bring fear to many people coming from the Visayas and Luzon region. It is easy to relate the city with bombing and war, which is unfair because Cotabato has long work its way to become one of the friendliest independent city in the SOCCSKSARGEN Region. In fact, roaming around Cotabato you will be greeted by nothing but the friendly faces of the locals.

Yes, Cotabato is one of the friendliest and safest places for tourists in the Mindanao region. So, if you are really looking to explore all corners of the Philippines, make sure to include it in your must-see destinations. Here’s a list of tourist spots you must include in your itinerary to complete your trip in Cotabato City.

The Grand Mosque was named after the Sultan of Brunei who reportedly funded part of its construction. It is one of the most striking landmarks in the city with its attractive yellow domes, beautiful minarets and white and cream walls. It is a gigantic structure that can hold over a thousand worshippers.

How to get there? Take a south-bound Awang jeep and ask the driver to drop you off at the Husky Bus Terminal. From there, hire motorbike (habal-habal) to take you to the Grand Mosque. The round trip fare is 100-150 Php.

This is the oldest Christian church in Cotabato City. It was built in 1872 by Spanish friars as can be easily seen in its architecture and design. Inside, you will find relics of the living past, which together with the church housing them stand in testimony that both the Muslim and Christian religion can co-exist harmoniously. One of the most interesting features of the Tamontaka Church is its underground passageway leading to a catacomb which is part of a network of caves for which Cotabato is named from.

Found right at the heart of the city, is the one-of-its-kind Kutang Bato Cave. It was used by Filipino soldiers during the Second World War to outsmart and fight the Japanese invaders. It had also provided natives a sanctuary when the Spaniards tried to convert them to Christians. The cave has several entrances scattered around the city, but only four are open to admit visitors.

This monument was built in honor of Japan’s Provincial Commander Takumi Butai and Japanese soldiers who died in the city during Second World War. It was the Butai’s wish to have his ashes be buried in the city when he died. The shrine was put up Kyoto’s Lion’s Club in cooperation with Cotabato’s City Government.

PC Hill is a 90-feet stone fort used by the natives as a watch tower to detect and repel enemy assaults during the war. It gives a panoramic view of the whole city as well as the Rio Grande de Mindanao. Today, it serves as a headquarters to the Cotabato City Internal Defense Command.

This is the longest river in Mindanao and second largest river in the Philippine. It is estimated to be 96 meters wide and 182 kilometers long. Various watersports and boat racing activities are held along it, especially during the Feast of Peñafrancia and the Shariff Kabunsuan Festival.

Cotabato City is one interesting destination and the above tourist spots are but a few must-see. There are certainly a whole lot more places of interest that will make you want to give the city a second visit.

2 thoughts on “Top 10 Attractions in Cotabato”