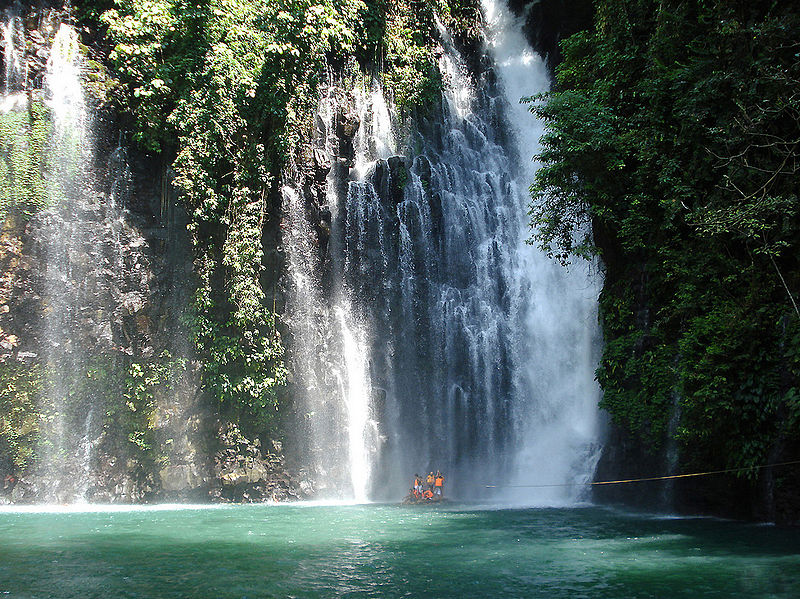 There’s nothing more refreshing than walking into a waterfall after miles of hiking on a sweltering day. So, if the beach doesn’t excite you anymore, it’s time to chase some waterfalls, literally. Speaking of which, the Philippines is home to some of the most beautiful waterfalls in the world. And if you’re looking for something big and incredible, here are the top three biggest waterfalls in the country.

Touted as the Philippine’s answer to America’s Niagara Falls, Tinuy-an is a multi-tiered waterfall in Bislig, Surigao del Sur in the southern part of Mindanao. It measures 55m in height and 95 meters in width, making it the widest waterfall in the country.

Tinuy-an is one of the most visited tourist attractions in Surigao province, partially because of its picturesque view. The falls is surrounded by lush vegetation and trees, and its water drapes and cascades through in a curtain of white froth, making the long trip worth taking.  In fact, the falls has been featured in various international TV shows and travel magazines already. Its unmatched beauty and natural splendor will strike you in awe and make you forget all the pains the numbing habal-habal (single motorcycle) ride through rough and dusty roads that you just go through.

As inviting as they may be, waterfalls are not always easy to reach. Most of them are tucked in the mountains, requiring arduous trekking – probably the reason why many would rather prefer the beach. Maria Cristina is different though. It has none of the drama, making it one of the most visited waterfalls in the Philippines.

Standing at a height of 98 m, Maria Cristina Falls is the second highest falls in the country. It is a waterfall of the Agus River in the city of Iligan in Mindanao popular for its beauty and grandeur. The falls is more than just a tourist attraction as it is also the primary source of electric energy, powering Iligan’s industries.

Tinago Falls is another of Iligan’s, the City of Majestic Waterfalls, treasures. It is located in a deep ravine in Barangay Ditucalan, aptly named for its hard-to-reach location (Tinago in Filipino means hidden). To reach the falls, you must complete the 500-step descend on a winding staircase – a bad idea for those suffering from vertigo and knee pain.

Those brave and strong enough to complete the trek down the ravine though are always rewarded with an amazing experience. The falls’ water is very cold and refreshing. Write froth cascades beautifully down into a deep and calm blue-colored, basin-like lagoon. Hidden behind the falls is a small cave where you can enter and watch the water drop like an immaculately white curtain.

Legend has it that a powerful and influential sultan and his wife were cursed by an enchanter to have an ugly child because of their selfishness and proudness. So, when the baby was born, the couple hid her in a cave to avoid embarrassment. They named her Tin-ag, which means hidden face. Several years later, when the child grew out of the cave for the very first time, the enchanter saw her and offered to transform her into something of great beauty and splendor. Tin-ag accepted the offer and became the Tinago Falls.