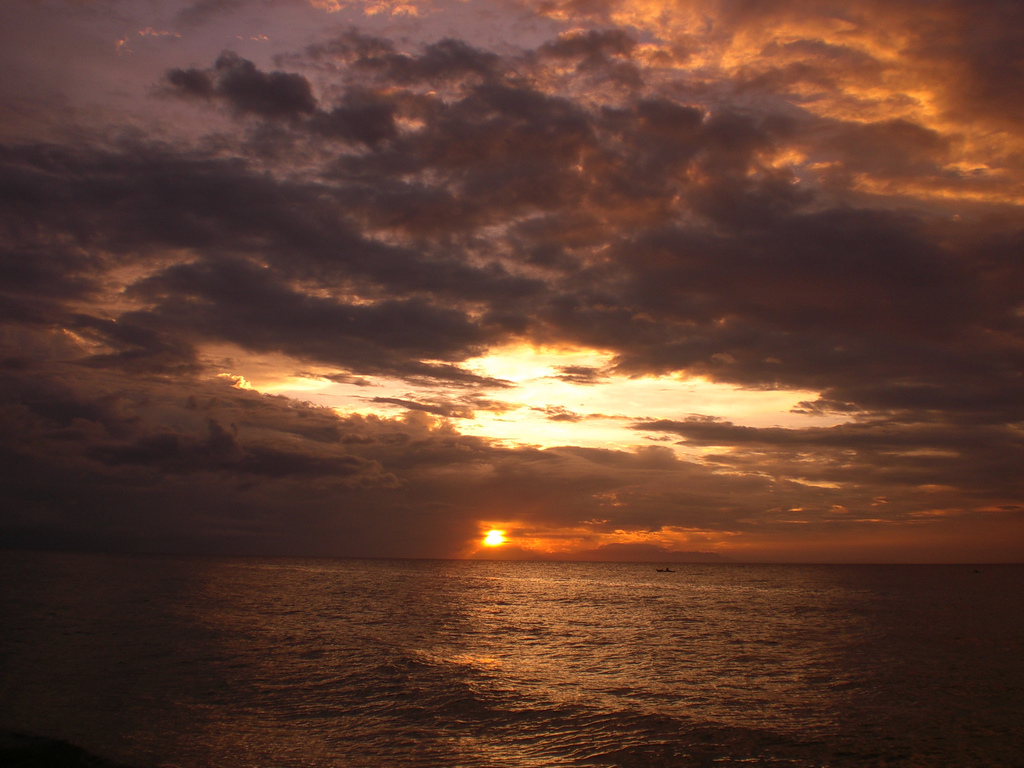 Located at the center of the Philippine archipelago, Marinduque has the shape of a human heart floating on a clear blue sea.  The province is dotted with undulating hills, panoramic valleys and seaside cliffs that are mixed with patches of flatland.  Marinduque is blessed with fertile soil, rich water and precious mineral deposits such as iron, copper and lead.

Marinduque is best known for its unique cultural traditions such as the Moriones tableau, a colorful observance staged by the locals dressed as Roman centurions during the Lenten season.  Tourists flock to the island province to witness this unique religious event.  Those who visit Marinduque however, are treated to more than just the pageantry and spectacle of this festival as they discover and experience the varied delights this province has to offer – fine beaches, quality crafts, delicacies, nature explorations and the traditional Filipino hospitality.

When the Spanish colonized the province in 1581, Marinduque was a part of Batangas province.  Towards the 17th century however, Marinduque became part of Mindoro which figured prominently in the galleon trade and early Chinese commercial contact.  Wares from China dating back to the Sung Dynasty (920-1289 AD) were found in Sta. Cruz caves.  Other Chinese artifacts were recovered in underwater expeditions near the town of Pinggan, Gasan. It was during the American regime when the Province of Marinduque was created.  The provincial government was established with its capital in the municipality of Boac.

Today, the province offers a quaint and laid-back ambiance amidst the excitement of discovering unspoilt beaches and adventure trails.  The name Marinduque originated as a close variation to Mt. Malindig, the province’s highest peak.  The term malindig means tall and elegant stature.  The province’s gifts of nature, along with the Marinduqueno’s culture and artistry, stand  proud among the country’s destinations.

Marinduque lies between Bicol and the Visayas Regions.  Its culture and customs are part of the tightly woven tapestry of Philippine culture.  The tradition of putong or coronation is the Marinduqueno’s way of welcoming friends and honored guests.  As an oral expression of thanksgiving and prayer forn long life of a guest of honor, a group of men and women called mamumutong chant greetings, sing, dance and place a crown of flowers on the honoree’s head.

The bastions of Christianity in Marinduque were carefully constructed as a place of worship and as a refuge from invasions and natural calamities.  The churches were designed with high walls on high ground to sight the approach of invaders from land or sea.  The churches have many altars with carved and painted pilasters and panels.

Boac served as a stop-over and resting place for priests and Spanish officials.  Boac Cathedral was built with the original name “Simbahan ng Ina ng Biglang Awa” (Immaculate Help) in 1792.  Similar to other churches in the country, the Sta. Cruz Catholic Church stands imposingly over all other structures in the community.  It was constructed in 1760, thus making it the oldest standing structure in the province.

Marinduque is famously identified with the staging of the colorful Moriones tableau.  This century old and week-long celebration during the Holy Week is a re-enactment of Christ’s passion and death with Longinus as the other central character.  He was the blind centurion who miraculously regained his sight and later converted into Christianity.

Although the celebration is province-wide, the practice originated in the town of Mogpog where the Lenten observances has undergone subtle changes over a hundred years.  Moriones draws its name from Morion which means mask or visor such as those worn by Roman centurions.  Indeed, the festival is characterized by the “Moriones” men or women dressed in colorful Roman costumes, processions and a week long re-enactment of the story of Longinus.

Marinduque’s other festivals include: Kalesayahan sa Gasan held every August, Haring Kalabaw Festival in Sta. Cruz and the Bila-bila in Boac where street-dancers depict butterflies.

Archaeological findings in Marinduque’s many caves attest to the fact that the island was a settlement of Mangyans and other ethnic groups long before the Spanish arrived.  Numerous artifacts used by the early inhabitants have been unearthed and lend credence to a skilled civilization.

Many caves are yet to be fully explored and documented.  The most famous of these cave system is Bathala Caves which are a complex network of seven mostly uncharted caves.  The cave system is said to be multi-tiered, hosting thousands of bats and pythons.  The easiest access to the Bathala Caves is through Barangay Ipil in Sta. Cruz municipality.  It’s a fair challenge to squeeze yourself through rocks that guard the cave’s mouth.

There are other caves waiting to be explored by adventurous travelers.  The town of Mogpog hosts a 3-chambered cave called Tarug Caves.  In the capital Boac, spelunkers take delight in exploring the limestone Talamban Caves situated on a 300-meter hill.

Marinduque has its shares of natural attractions.

Immerse yourself in the medicinal waters of Buenavista’s Malbog Hot Springs, one of the sulfur springs found in the Southern Tagalog region.  Its lukewarm sulfuric waters come from the deep bowels of Mt. Malindig.  Then municipality of Mogpog has the Paadjao Falls which is a series of gently cascading falls.  Kawa-kawa falls, located in Sta. Cruz, is named after pools carved from rocks and features a 25-ft cascade.

Visitors who wish to dive into Marinduque’s underwater haven will the thrilled to discover shipwrecks and excellent coral formations.  While the west side portion of Natangco Reefs in Mogpog has a set of fringing reefs excellent for snorkeling. Submarine cliffs on its westside offers superb scuba diving opportunities.  Scuba divers may also opt to explore the depths of Tres Reyes Islands and the islets of Polo, Maniwaya and Mompong.  The beaches in Maniwaya, Torrijos and  Elephant Island offer succulent white sand beaches stretching for many kilometers.

The expert weavers of Torrijos

In Torrijos, placemats and wall decal are woven the traditional way using buntal fibers.  This handicraft industry has become a source of livelihood as the looms are managed and operated by a cooperative.  Every buntal fiber of various colors is painstakingly woven into intricate designs and patterns.  The people are also experts in making Kasily earthenware.  These are made from swamp clay which is extracted from a depth if 4 – 5  ft.  The pots are shaped through gentle hammering using a wooden mallet and then finished with the potter’s wheel.  The skill and artistry of the people of Marinduque is readily evident in each Moriones headgear.  The mask is carved from a soft wood called dapdap and is decorated with bamboo, feathers and  shells.  The intricate carving, expertly painted mask and the decorations make each item a novelty and a testament to their skill and artistry.

Marinduque is the country’s butterfly capital

Marinduque’s mild climate and diversity of ecosystems provide the perfect settings for butterfly breeding.  Numerous Lepidoptera farms can be found in the province, most of which are concentrated in the municipality of Gasan.

These farms, varying in sizes and collection of species, breed and export common butterflies to the live and decorative markets worldwide.  The live butterfly market has been gaining popularity especially during events wherein each butterfly is placed in a triangular envelopes designed for easy release.  The release of these butterflies in other places contributes to propagation of the species and flora.

As an example of conservation through development, the province’s Lepidoptera farms cultivate thousands of pupae weekly.  Aside from promoting butterfly awareness and conservation, the industry has created jobs through sustainable development of wildlife.  With this fast growing industry, Marinduque can rightfully claim its status as the butterfly capital of the Philippines.

Marinduque lies 170 kilometers southeast of Manila, resting on the Sibuyan Sea between the Bondoc Peninsula at the southeastern portion of Luzon and Mindoro Island.  At its north-northeast side is Quezon, west-southwest is Oriental Mindoro, and west by Batangas.

The island province has an aggregate land area of 95,920 hectares, including four major islets and eight minor ones.

The 2012 National Statistics Survey lists the total population as 238,850.

Marinduque has two pronounced seasons: dry from December to May, and wet from June to October.

The language of choice is Tagalog although English is widely read and spoken.

Marinduque can be reached by air from Manila via Asian Spirit Airlines which flies 3 times a week.  These flights bring the visitor to Gasan.  Another way to reach the province is by bus to the Port of Lucena in  Quezon then by ferry to either Balancan Pier or to Buyabod Pier.  Private vehicles can also be brought to the province via the same route using the roll-on/roll-off ferries.  From the pier, vans or passenger jeepneys take you to your hotel.  Jeeps, tricycles as well as vans-for-hire are widely available for going around the province.

For those who plan to go trekking, it is advised that jeans/jogging pants, highly visible long-sleeved shirts and outdoor shoes be worn at all times while on the trek.  Divers need to bring their own gear/equipment and coordinate with a tour operator in advance.