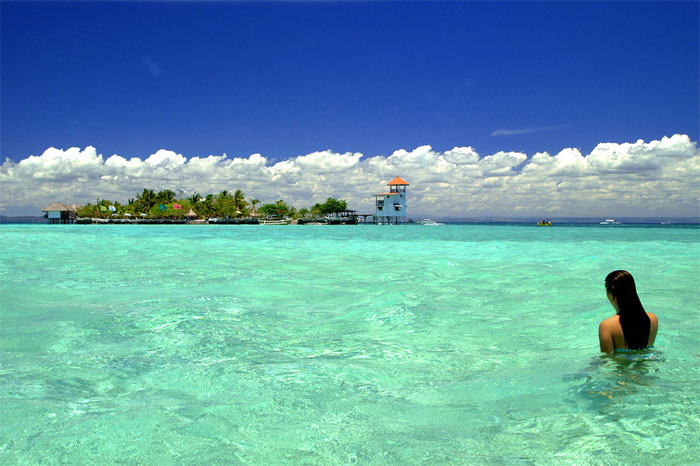 When you talk about the beaches in Cebu, people would mostly suggest that you go to Mactan. While Bantayan Island, Camotes Island and Malapascua look to be more seductive options, the allure of Mactan Island is that it’s so close to the city. Bantayan, Camotes and Malapascua all entail long travel hours both on land and sea.

So, if you’re looking for the nearest place to take a dip, heading to Mactan Island is the best option. Of the many beach destinations on the island, Nalusuan Island ranks at the top.

Located in between the province of Bohol and Mactan Island, Nalusuan was once a sandbar but was reclaimed in order to create the Nalusuan Island Resort which now occupies the entire island.

If you were ever to go on an island hopping adventure, Mr Boatman will most likely take you to two or three of the islands mentioned above.

What can be expected at Nalusuan Island?

The island is a marine sanctuary and is main reason for the arrival of tourists. But apart from seeing the many fishes, guests can stay on the island as there are amenities for that. The island also has a restaurant so you don’t have to worry about cooking your own meals.

If you want to explore further, you can also embark on an island hopping adventure. You can even reach as far as Pandanon Island whose white sands are just glorious to see. Caohagan Island is a great place for snorkeling while Hilutungan is another great marine sanctuary.

Other islands that you can visit include: Talima (another sanctuary), Cabulan Island (for snorkeling), Bagumbanwa Island, Mocaboc Island and so much more.

How to go to Nalusuan Island?

At the port, there are several boats available that you can charter to your island destinations of choice or just Nalusuan Island if you want. You can talk it over with Mr Boatman with regards to the number of islands you can see and how much to pay.

When is the best time to go to Nalusuan Island?

The summer months are usually the best time to go as the weather is favorable. This is around March to the end of May or early June. However, it’s best to check the weather even if its the summer. Some of the boats won’t risk travel if the weather is bad.

Although the best time to go is during the summer, there’s no stopping you from taking a trip during the months after. Again, pay attention to the weather report and only go when it’s clear that the weather would be fine.

Also, traveling in the morning is the best way to enjoy the trip as the waters are much calmer.

2 thoughts on “Nalusuan Island – A Man-Made Haven in Cebu”