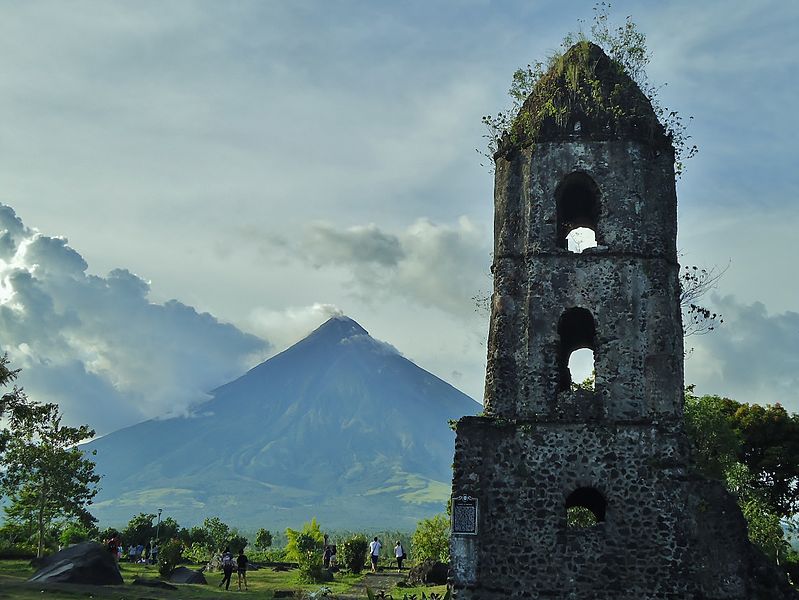 Albay is one of the top destinations in the Philippines, mostly thanks to the presence of the Mayon Volcano which is noted for its perfectly-shaped cone. Without a doubt, the active volcano does provide a wonderful backdrop for the city of Legazpi. Although Mt Mayon is undoubtedly the most popular attraction in Albay, there are other attractions close by as well.

As mentioned earlier, Mt Mayon is an active volcano and is the most active one in the Philippines. Although there has been recent activity in the volcano, it has erupted more than once in its history. The worst one happened way back in February 1, 1814. It was the most destructive one to date where lava flowed, but although not as much as the first eruption recorded in 1616. Even if that was the case, it was one of the worst disasters to have hit Albay.

The volcano belched dark ash and the town of Cagsawa was covered with tephra. Covered isn’t exactly the most appropriate term as it was mostly buried. A lot of trees were burned and rivers were also damaged. The eruption didn’t just affect Cagsawa, but nearby towns as well. The town of Cagsawa featured a church and because of the 1814 eruption, the facade was largely destroyed. The belfry is the only one left standing in what is now called the Cagsawa Ruins.

Visiting the ruins is also one of the best ways to get a great shot of the volcano. In fact, it’s the scene you would mostly see in postcards. Cagsawa Ruins is located in the municipality of Daraga.

The facade, belfry and baptistry of this church have been designated as a National Cultural Treasure. Since Mt Mayon is shared across lots of towns across Albay, taking a picture of it as backdrop from Daraga Church is quite possible too. However, timing may be an issue as mostly there are vehicles that would obscure your view. Consider it lucky when you visit and can take a picture sans vehicles.

A restaurant located in Daraga. Apart from the great gastronomic experience, you’ll also love the history behind the restaurant. It’s actually an old home that was adapted to a dining establishment. It’s a great reminder that not all old architectures in the country have to be razed over for something new.

Lignon Hill offers a really splendid view of Mt Mayon. You get the benefit of being on top of hill and the vantage point is just fantastic. Although you can get picturesque views from different towns, the view from Lignon Hill is a different experience. Here, you get to see Mayon Volcano tower over rice fields. All the green you can see and what wonderful photo opportunities too!

Bikolano cuisine is something you should try when in Albay. One of the best dishes you can ever indulge in is Bicol Express, a stew made from chilies, coconut milk, shrimp paste, onion, garlic and pork. Although this was popularized in Malate, this is the origin of the dish.

Other than attractions, there are events worth seeing in Albay. These include: