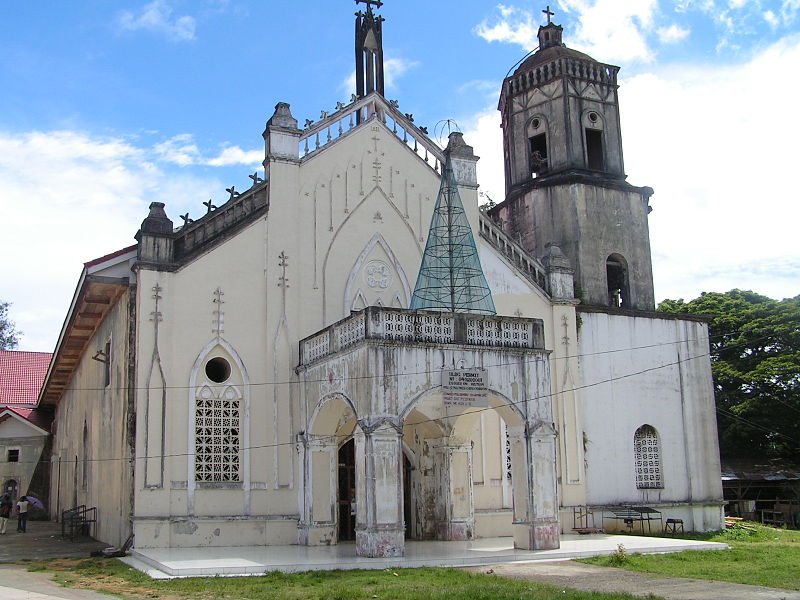 It is Bohol once again! In the first part of our piece, we have listed ten majestic ancient Roman Catholic churches in and around Bohol. And there are just so many of them that we have to create part two, so here are five more . . .

The church in Garcia Hernandez is that of St. John the Baptist installed in 1848. The church started as a tiny chapel in 1844 with Jagna as its mother parish. Some 13 years after, a bigger church was built and the town of Garcia Hernandez was established, lovingly named after the two Recollects, Fray Jose Garcia of Loon and Narciso Hernandez of Guidulman, who teamed up for the establishment of the town.  The early church made of coral stone and cement had seen better days – it was burned down in 1901 and was struck by an earthquake in 1990. The town church is now more modern with a brickwork façade, a wide central aisle on the interior and the ceiling adorned with Doric frieze.

The church of Guindulman features a portico at the entrance. Its façade displays the year 1881 indicating it was a rebuilt after the quake in 1880. Yes, the church had been hit a couple of times with destructive tremors, one in 1880, another in 1922, and the most recent one in 2013, which caused huge cracks on its walls and ceilings. What is queer about the church is the rather short belfry that stands merely two meters above the ground. There must have been a taller, grander belfry back in the olden days. The remains of the older structure of neoclassical styling stood behind the new building made of coral stone at the lower register and concrete above it.

Sadly, the structure succumbed to the destructive force of the 2013 earthquake that struck the Bohol and neighboring islands. What is left of the church is just its façade, and everything else is a pile of rubble. Like other ancient churches in Bohol, the GI roofing was initially replaced with tile roofing, which was impractical for a quake-prone country and for antique structures such as the Inabanga church.

The church of Jagna is one of the many churches under the leadership of Austrian Jesuit priest, José Sanchez. The three-storey structure built around the 1600s was unfortunately destroyed by a fire in 1808. What stands today is a substantially renovated church with heavily plastered cement built to resist storms and other natural catastrophes. The façade is decorated with a pointed arch borrowed from Gothic styling. The church was fortified after suffering damages from a typhoon in 1980 and an earthquake in 1990. When the quake of 2013 hit, the church suffered minor damages.

Jetafe used to be barrio of Inabanga, and only became a town in 1835 and a parish in 1876. The first church built in 1883 was made of tabique on mortar base with a stone flooring on the nave and wooden flooring on the sanctuary. The second church built of poured concrete replaced the old one in 1926. The church’s façade is similar to that of Tubigon with a main bell tower on the upper portion and a portico on the lower portion.

There are still at least ten more churches in Bohol that is worth a pilgrim’s time. Despite the depressing condition that many of these churches are in after the devastation of the 2013 massive earthquake, a visit to any one of these parishes are sure to bring hope and support for the locals who have worshiped their God in these age-old holy sanctuaries for hundreds of years.