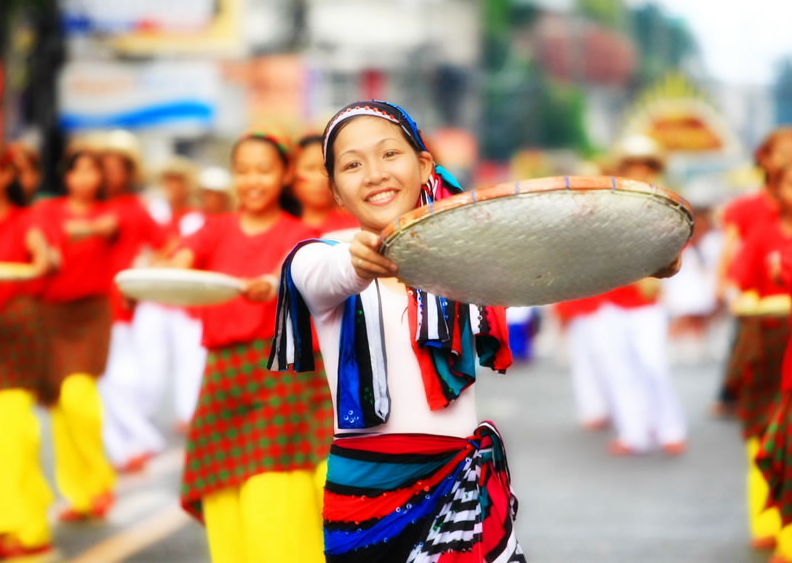 The City of Roxas in Capiz is one of the centers of education and trade in all of Panay Island. It was named after the late President Manual Roxas during its ratification on May 12, 1951. Capiznon and Hiligaynon are two of its local dialects, although Filipino and English are widely understood. Roxas is known by many names: Seafood Capital of the Philippines, Cleanest and Greenest City in Western Visayas, and 100% Tobacco-Free.

Aside from its rich marine waters and clean surroundings, Roxas is famous for its Sinadya sa Halaran Festival in honor of the city’s patron saint, Virgin of Immaculate Concepcion. The festival is held annually from December 4 to December 8.

It is actually a merged celebration between Roxas City’s “Sinadya” and Capiz Province’s “Halaran”. Roxas used to have its separate festival, but the merger was to cut down the costs of the festivities.

Like most festive celebrations in the Philippines, the Halaran is a very colorful and joyful one. It features a grand parade of colorful dancers, floats and flowers. It also features a fluvial parade participated by multi-colored and lavishly designed boats.

Folks from various domestic origins as well as from overseas flock to Roxas to participate in the weeklong festivities, partake in the sharing of various seafood specialty dishes, join with the dancing and merrymaking, witness the majestic pyrotechnic displays, and most importantly to pay homage to the Virgin saint.

Sinadya sa Halaran is actually the conglomeration of two feasts: Sinadya, a city festival and Halaran, a provincial festival. Capiceños or the people of Capiz are known to celebrate both feasts as one, hence the name Sinadya sa Halaran, or the festival of sharing and thanksgiving.

The Sinadya sa Halaran is comprised of various activities, namely:

Halad sa Kasimanwa – this is held to cultivate the value of sharing among the people. Each one is encourage to donate or offer whatever little help they can to other Capiceños, particularly the street kids.

Pasundayag Capiznon (Capiceño Variety Show) – this showcases all the festivals throughout the Province of Capiz, rolled into one event. The performances illustrate the different livelihoods and traditions of the local people.

Prosesyon sa Suba (Fluvial Procession) – glittering and heavily decorated boats sail their way through the river of Panay to honor the the river’s social, economical, and religious importance.

Duag Capiznon – this is highlighted by the parade of giants exhibiting various local products. Government officials and private citizens join in the parade, and the giants or higantes are displayed in the Roxas City Plaza until the end of the festivities.

Bugsay, Bugsay (Paddle, Paddle) – this is a paddling or boating race to showcase the importance of bancas to the lives of the local people in several centuries ago until the present.

The Sinadya sa Halaran is a simplified version of the infamous Sinulog in Cebu and Masskara in Bacolod. Contingents and participants of the Sinadya sa Halaran usually wear simpler, more native-looking costumes, although still ornately pleasing to the eyes. The dances are also very close interpretations to the way of life of the local people.

From Manila: The best way to get to Roxas is via plane. Tricycles are the main modes of transport in the city, and there are plenty of them servicing the commuting public. There are also ships and RO-RO boats that travel overnight from Manila to Roxas.

From Iloilo: Roxas is a three-hour bus ride away from Iloilo for Php150.

Since this is a festival of festivals in Capiz, expect a huge crowd along the streets. It is most appropriate to book hotels and flights in advance to ensure slots and cheaper rates. For a well-deserved vacation, extend your holiday to include Christmas and New Year to make room for some sightseeing and island hopping.