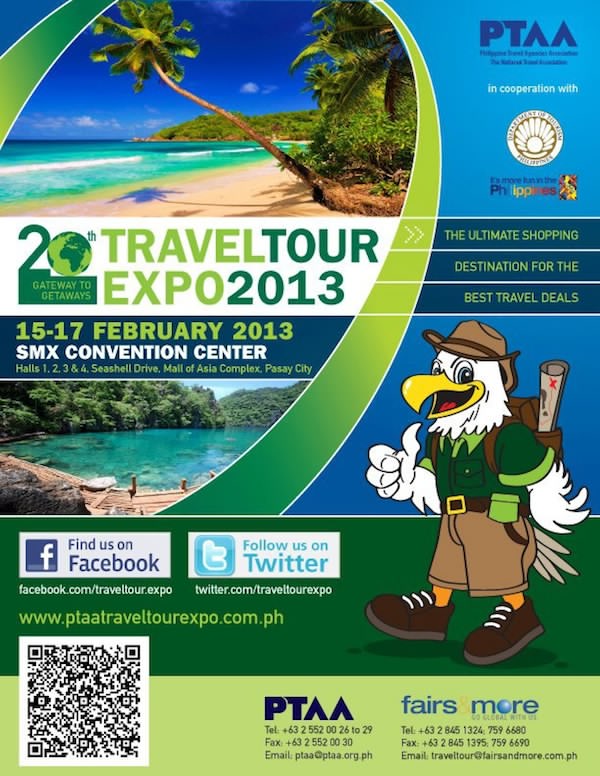 The country’s biggest international travel and tourism event, offering the best travel deals and tour packages at the most affordable prices, is just around the corner. The 20th Travel Tour Expo 2013 themed “TTE: Gateway to Getaways,” an event jointly organized by the Department of Tourism (DOT) and Philippine Travel Agencies Association (PTAA) to promote new tourist destinations will take place from Feb. 15 – 17 at the SMX Convention Center.

Travel Tour Expo head Aileen Clemente said that some 5.5 million foreign tourists and 35 million domestic tourists are expected to travel nationwide this year. Boracay, Cebu, Bohol, Davao and Puerto Princesa are among their top picks but the DOT and the PTAA are also promoting places such as Baler and the Cagayan Economic Zone Authority (Ceza). Baler hosts 15 resorts while Ceza has 17 hotel-resort locators.

There will be more or less 200 exhibitors which include the Philippine Airlines (PAL) and other international tourism representatives.

According to Clemente, the event will feature tourism ambassadors (such as Hello Kitty from the Japanese embassy) as well as daily activities and raffle prizes to encourage more travel.

There will be more or less 200 exhibitors which include the Philippine Airlines (PAL) and other international tourism representatives.

Expo participants are expected to generate 20 percent more sales from the three-day event this year from the P310 million generated during the 2012 expo. More travel deal seekers are expected to attend the event.  They expect 100,000 visitors in this year’s ultimate travel-shopping destination compared to the 60,000 last year.

The sales growth would also come from the higher number of booths to 554 from 477 in 2012 said PTAA president John Paul Cabalza.

“The tours booked at the expo could serve as a dry run for new destinations before tour operators actively promote their sites abroad. Visitors, meanwhile, benefit from great discounts and prizes available at the expo,” Clemente said.

Also to be featured at the Expo are foreign destinations to be highlighted in their country’s own booths such as Japanese prefectures promoted in the Japan pavilion. “Filipinos going abroad are also welcome because they also market the Philippines in their own way, so hopefully that would later translate to more foreigners coming here,” said PTAA media committee head Marciano Ragaza.