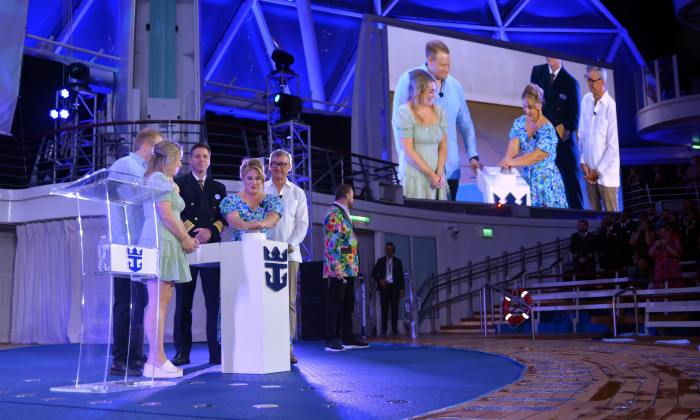 Last night (December 10th), Royal Caribbean International officially welcomed Wonder of the Seas into the family with a ceremony appropriate for the world’s newest wonder. The cruise line’s latest ship, named by its Godmother and Wonder Mom, Marie McCrea from Pennsylvania, features the ultimate combination of firsts and signature favorites for parents, kids, and grandparents alike. The nighttime ceremony also marked the beginning of a new chapter for Wonder, which is making waves as Port Canaveral’s new year-round family vacation destination.

Royal Caribbean executives and teams, families, friends, travel advisers, the cruise line’s partners, and others gathered on board the world’s largest cruise ship to commemorate the occasion in the AquaTheater, one of the brand’s unrivaled entertainment venues. In the traditional role of Godmother, Marie bestowed a blessing of safety on Wonder, its crew, and the millions of families who will make lifelong memories on board in the coming years. On stage with Marie were Royal Caribbean Group President and CEO Jason Liberty, Royal Caribbean International President and CEO Michael Bayley, and her daughter, Allie, who nominated her mother for the job as part of Royal Caribbean’s nationwide search, which began on Mother’s Day.

The Wonder of the Seas cruise ship, a first in the groundbreaking Oasis Class, encourages astonishment and adventure in kids and visitors of all ages with feats and experiences spread across eight neighborhoods. To locate the perfect Godmother, Royal Caribbean turned to TikTok and launched the #SearchforWonderMom campaign, which resulted in 16,000 videos and 10.6 billion hashtag views.

The cruise line’s search ended when they heard Marie’s tale, about a devoted mother, wife, and cancer survivor whose energy motivated her family and those around her to embark on excursions and cherish every minute together despite the challenges they encountered.

“It was an honor to officially welcome Marie and Wonder of the Seas to the Royal Caribbean family,” Royal Caribbean International president and CEO Michael Bayley remarked. “Marie’s story is one of incredible strength and family memories to last a lifetime, and those are the types of memories we’ve committed to creating with our guests and crew on every Royal Caribbean ship for more than 53 years. Wonder is the adventure of all adventures, combining what families know and love on our revolutionary Oasis Class ships with brand-new experiences, and it has already given amazing vacations to over 180,500 guests since its debut in March.”

The newest ship in Royal Caribbean’s groundbreaking Oasis Class offers a variety of new adventures and fan-favorite attractions for the entire family. Highlights include the Suite Neighborhood, the new eighth neighborhood that welcomes Royal Suite Class guests to an elevated Suite Sun Deck with a plunge pool and bar, the most epic Ultimate Family Suite, and more; the first Mason Jar Southern Restaurant & Bar, which serves Southern staples and classics with a twist for brunch, dinner, and late night; and Wonder Playscape, a new underwater-themed play area for kids with slides, climbing walls, imaginative puzzles, and more.