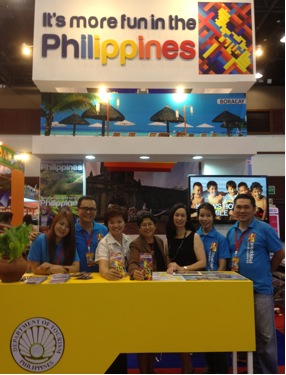 Organized by Thai Travel Agents Association (TTAA), an association of Thai Outbound Tour Operators, the three-day fair held at the Queen Sirikit National Convention Centre in Bangkok drew almost 600,000 visitors and close to a thousand booths from 14 NTOs, 3 embassies, 19 airlines, 132 travel agents, and other travel-related suppliers. The Thai Minister of Culture, Mr. Sontaya Kunplone, was among those who graced the official opening ceremony.

“There is no stopping the country from riding high on a wave of global attention. This is certainly another feather in our cap. As the world’s perception of the Philippines begins to improve, all the more should the groundwork begin on market development—our topmost and crucial job for the next three years. We have definitely managed to hit the ground running in Thailand with this winning feat,” Secretary of Tourism Ramon R. Jimenez Jr. said.

Considered a new opportunity market for the Philippines, Thailand produced 3,736 visitors in January 2013, registering a double-digit growth of 19.55% from the same period last year. In 2012, a total of 40,987 Thai tourists (or 10.9% of the visitor volume from ASEAN region) came to the Philippines.