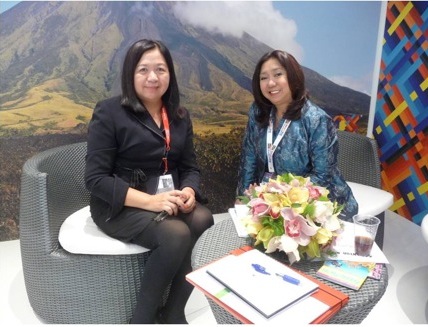 Officials of the Philippine Embassy in Warsaw  and Department of Tourism (DOT) met on March 6 at the sidelines of ITB Berlin to fine-tune joint activities for an optimum Philippine tourism campaign in Poland in 2013.

Ms. Tan expressed her willingness to hold a workshop-forum and meet with key tourism industry players in Warsaw and agreed to participate in TT Warsaw. Ms. del Mundo said that the Tourism Promotion Board will likewise participate in and provide the Embassy with tourism promotion materials before and during the TT Warsaw.

Poland’s potentials as a source market for PH tourism are increasing. Poland’s economy, the biggest in central Europe and the 6th largest in Europe in the 27-member European Union (EU), has been growing robustly while its neighbors have slipped into recession. In 2011, its GDP was estimated at $765.6 billion and its GDP per capita was placed at $20,100.00.