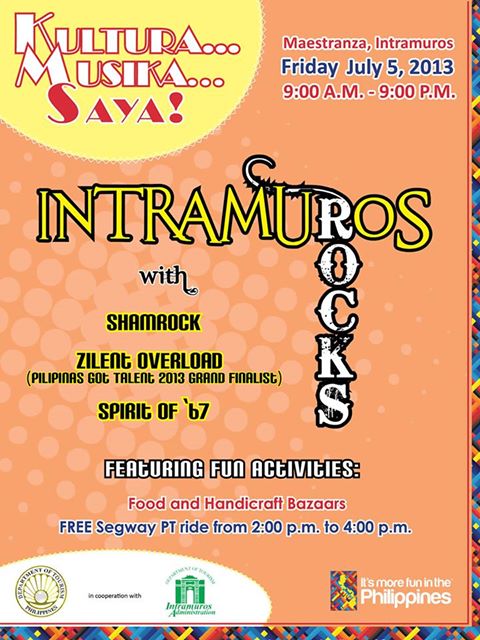 The Department of Tourism (DOT) and the Intramuros Administration will launch  “Kultura…Musika…Saya!” featuring Intramuros Rocks, a free-admission concert at the Maestranza Park of the Walled City scheduled on July 5, 2013. Intramuros Rocks serves as a kick-off activity of the many programs and events under the Intramuros Redevelopment Plan, aimed at promoting cultural appreciation and heritage awareness to the public, especially the youth. The concert will feature bands and artists including Shamrock, Spirit of ‘67, Pilipinas Got Talent finalist Zilent Overload, and many others. There will also be a bazaar featuring food stalls and booths selling local handicraft, tribal arts, and other novelty items within the newly restored Maestranza Park.

The venue, also called Almacenes Curtain Wall, is situated right beside the Pasig River and was a former storehouse and soldier’s quarter during the Spanish time. Formerly the seat of Spanish colonial rule in the Philippines, Intramuros is home to important historical sites and tourist spots such as Fort Santiago, Manila Cathedral, San Agustin Church and Casa Manila.

“Intramuros, as a historical and cultural center, plays an important role in the promotion of Manila as a premier destination. The walls of Intramuros tell a beautiful story of our resilience. It is not only an important cultural landmark, but also one of the historical treasures we Filipinos must protect,” Tourism Secretary Ramon R. Jimenez, Jr. said.

“It would be fulfilling to see our youth of today discover new reasons to appreciate the Walled City and become active participants in its promotion,” the tourism chief added.

Quick Ways To Get Compensation For Delayed Flights

Babies Onboard: What You Need To Prepare For International Travel With Kids