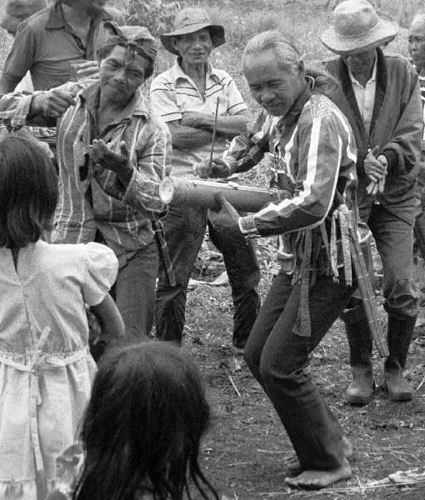 MANILA, Philippines – Every year, the province of Bukidnon celebrates the Kaamulan Festival, to honor the customs and traditions of its seven ethnic tribal groups: the Bukidnon, Higaonon, Talaandig, Manobo, Matigsalug, Tigwahanon, and Umayamnon. It is celebrated from the second half of February to March 10, which marks the anniversary date of the foundation of Bukidnon since 1917. This event is the only ethnic festival in the country: Philippines’ secret treasure not mentioned in most guidebooks.

Bukidnon celebrates the Kaamulan Festival, to honor the customs and traditions of its 7 ethnic tribal groups: Bukidnon, Higaonon, Talaandig, Manobo, Matigsalug, Tigwahanon, and Umayamnon. It is celebrated from the second half of February to March 10.
This year, the festival held its soft opening last Feb 18 that kicked off with the traditional ritual dedicated to the deity of bounty harvest.The uniqueness of this almost month-long festivity drove many tourists to take a close look of the culture and the beauty that surrounds the place. Bukidnon Business Directory celebrates this significant event by providing local and foreign guests the best accommodations and sightseeing destinations while taking a break from the inevitable festival crowd.Where to Stay:Pinegrove Lodge Mountain Resort – serves as the ideal point of departure for your excursions in Bukidnon. Due to its strategic location within the city center of Valencia, guests are offered easy access to the city’s must-see destinations.GV Hotels – a comfortable budget hotel with all the basic amenities needed for an accommodation without extra cost. GV hotel is an ideal choice of hotel for the practical travelers, offering the best value for your money.Dahilayan Forest Park – where accommodations entitle guests to free entrance and 10% off on all rides offered by the adventure park. Rooms are decorated in warm earth tones and hues, inviting guests a comfortable place to stay in. All rooms have a private toilet and bath with hot & cold water and guests are entitled to discounts on all rides.For a comprehensive list of hotels and restaurants in Bukidnon, visit http://bukidnonbusinessdirectory.com/category/business/ho….Where to Eat:

Del Monte Clubhouse – serves the most popular steaks in Bukidnon and offers a great view of the Del Monte Golf Course.

Cowboy’s Grill – a restaurant in Dahilayan where they serve it up Western style. Among its best sellers are the T-Bone steak, porterhouse steak, and ostrich steak. They also offer guests exciting horseback rides.

Botanica Gardens – where guests can enjoy pasta with herbs freshly picked from the backyard, and feast on the view of pine trees and flowery landscape.

For a comprehensive list of hotels and restaurants in Bukidnon, visit http://bukidnonbusinessdirectory.com/category/business/re…

But of course, immersing yourself with the biggest annual celebration in the whole province is still the best way to experience Bukidnon. Below is the anticipated 2013 Kaamulan activities:

Schedule of Activities for Kaamulan Festival 2013:

It is said that this year’s festival is grander in terms of events and activities as there are added tourist attractions like the Kaamulan Adventure Race and Mount Kitanglad Climb. Bukidnon business directory provides a list of other popular tourist attractions.

There’s also a number of businesses in Bukidnon selling souvenir and gift items. For a comprehensive list of hotels and restaurants in Bukidnon, visit http://bukidnonbusinessdirectory.com/.

Finally, another grand event to look forward to is the centennial year of the province of Bukidnon, set to be celebrated on the 1st of September 2014. List of activities are still in the draft of the recently founded Interim Centennial Committee.

Things to Keep in Mind When Buying a Backpack

Things to Keep in Mind When Buying a Kayak Rack