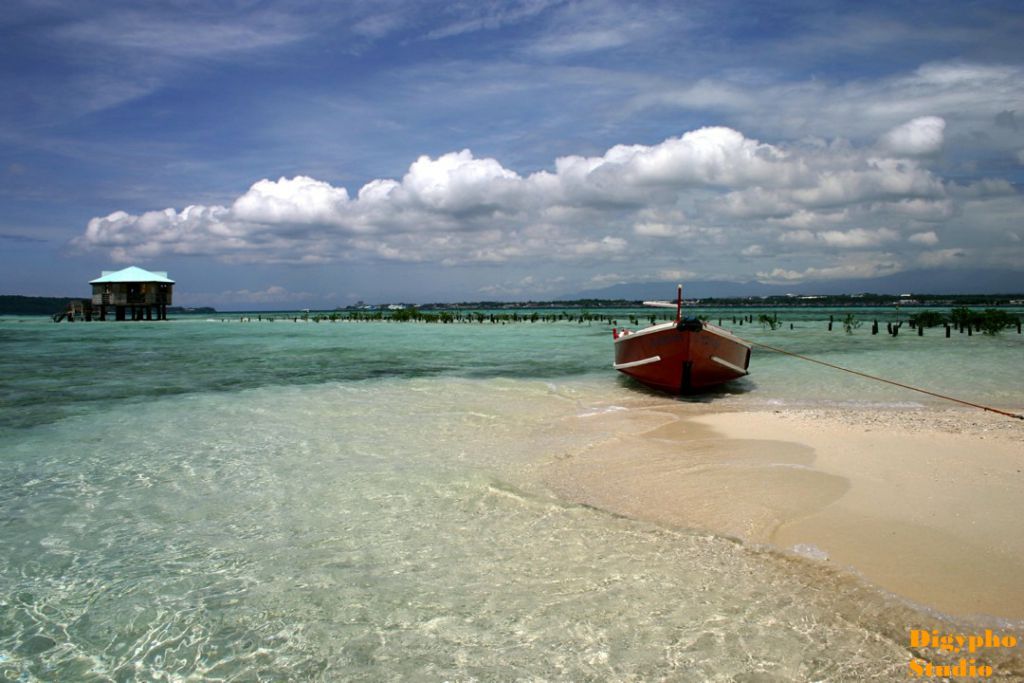 Samal Island is the beach center of Davao City. Unlike most other beach locations in the Philippines, however, Samal is more of a peaceful and serene destination. But that’s not what gained the region popularity throughout the nation and even the world. Somewhere out in the island waters is actually a jewel that surprisingly emerges when the tide recedes. It’s the paradise of divers and the heaven of beach enthusiasts – the Vanishing Island of Samal.

The Vanishing Island is just a small strip of white sands located just minutes away from the coast of Tambo, Babak in Samal. The island is visible only during low tides and can be noticed easily from the distance at the sight of houses floating just above the ocean. These have been made for visitors who wish to extend their stay in the island.

During high tides, visitors may roam around the island by foot with waters reaching their ankles only. Other tourists, however, choose to go diving and snorkeling especially when the waters are high. The crystal clear waters make it possible to enjoy the underwater view of sea grasses, corals, fishes and reefs. As such, it has been regarded a top diving destination in Davao City.

A prominent source of livelihood for the island locals is sea urchin. You will see many locals either waiting on their boats just near the coast or walking around the island, enticing visitors to try out their sea urchins. In the Philippines, sea urchins are typically eaten raw and are considered delicious delicacies. Many local vendors may also be seen selling fishes and other seafood varieties.

Samal’s Vanishing Island is just one of the numerous beaches and attractions in the Island of Samal, Davao del Norte. It has just recently been developed to attract tourists and travelers from all over the world. To further support the rich marine life in the island, mangroves have been planted all over the premises and the island itself has been declared a protected marine reserve area. If you are looking for a vacation spot that’s far from traffic, excessive noise, pollution or crowded shopping malls, then this island is definitely the perfect place for you to unwind.

How to Get to the Vanishing Island

To get to Samal’s Vanishing Island, you first have to travel to Samal Island from Davao City. You can choose from any of the following routes:

Other Things to Do in Samal Island

Samal Island offers a lot of leisure options for people visiting the area. Aside from the Vanishing Island, there are over 60 more resorts and natural beaches to explore in the region. Leisure here is not boring at all. Other than diving and snorkeling in this top diving destination in Davao City, there’s also kayaking on the coast lines and mountain climbing to consider. Life in Samal Island is leisured as it is one of the best beach locations in the Philippines. Just remember though that there are no taxis in the area. The primary transportation option in the island is by habal-habal or motorcycle.

*** Note: Thanks to Paul Lewin (digypho studio) for all the photos above.