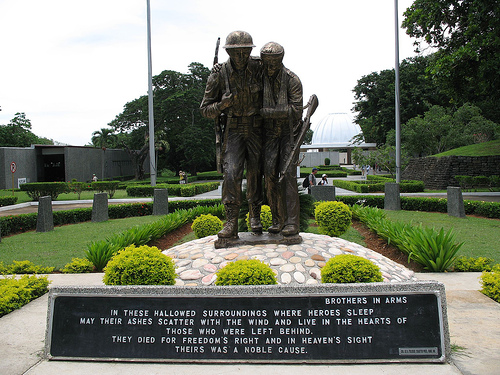 One of the parks situated on the Corregidor Island in the Philippines, the Filipino-American Friendship Park is a small formal garden that was constructed to commemorate the shared experiences and partnership between Filipino and American soldiers who had fought together during the Second World War, particularly in the Pacific War in the Philippines. Among its great features, the most distinctive is the Brothers in Arms, which is a bronze sculpture by Filipino artist Manuel Casas, standing 10 feet in height and showing an American soldier who supports a badly wounded Filipino soldier.

The Filipino-American Friendship Park is situated in a section of the Corregidor Island that is known as Middleside and is directly behind the Pacific War Memorial. Its area also covers a bird park and an aviary, the Youth For Peace campsite, the Battery Way and Battery Hearn, the wartime YMCA, the Middleside barracks and officers’ and privates’ quarters, its warehouse, its post stockade and other wartime utility buildings.

The Park in Detail

The park comprises a small walled garden area that is located behind the Pacific War Memorial. As previously stated, its most distinctive feature is the Brothers in Arms, which stands on a small stone mound at the center of a greenery circle located at the center of the park. The sculpture shows a badly wounded Filipino soldier who is being supported by his American counterpart, with the Filipino soldier having a bandage around his head and a bandage and a sling supporting his arm.

This monumental sculpture was constructed to capture the sense of camaraderie that grew between the Americans and the Filipinos who fought side by side during the war. Aside from the sculpture, there is also a large plaque in front of it, saying, “In these hallowed surroundings where heroes sleep may their ashes scatter with the wind and live in the hearts of those who were left behind. They died for freedom’s right and in heaven’s sight. Theirs was a noble cause.” There are also flagpoles on either side of the sculpture, with one bearing the Philippine flag and the other bearing the US flag.

You can visit Corregidor Island almost any time of the year, except for when there is a severe weather condition, particularly a typhoon. There is a lot of means you can get to this beautiful place, but the safest and most convenient is through a booked tour with Sun Cruises. This company operates under the wings of the Magsaysay Shipping Lines group and is committed to becoming a leader in terms of providing quality travel experiences that are cultural, educational and, most of all, fun, with respect to the environment and people.

Now, this cruise liner offers daily trips to the island, departing from Manila at 8 in the morning and arriving at passed 9 in the morning. You can find it at the ferry terminal near the Folk Arts Theater and the Coconut Place along Roxas Boulevard in Pasay City. Make sure you have prior reservation when taking the tour with Sun Cruises to make your trip fast and efficient without any hassle.