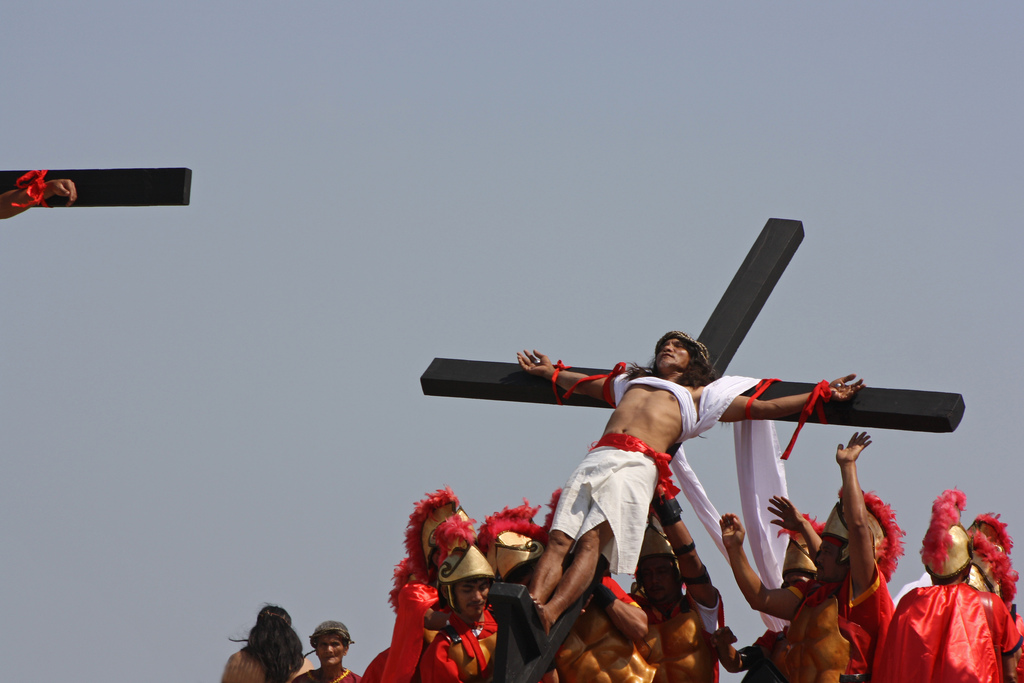 The re-enactment of Christ’s crucifixion that is practiced each year in the City of San Fernando originated in 1955 with the staging of Via Crucis (Way of the Cross), the only Kapampangan piece on the passion of the Christ written by an amateur, Ricardo Navarro. It was first performed during the Holy Week (in 1955) by an amateur volunteer artists of Barangay (barrio) San Pedro Cutud, who like the rest of the Filipinos during that period, had time on their hands because work or exertion on those holy days was taboo. It was only in 1962 that the barangay first witnessed an actual crucifixion during the play. The Christ was potrayed by Artemio Anoza, a resident of nearby Apalit town and a quack doctor who dreamt that he would become a religious leader and full-fledged healer. Wanting to realize this dream, he volunteered himself to be crucified as a sacrifice.

Since then, not a year passed without an actual crucifixion taking place during the re-enactment that has now been joined in by many penitents as a ‘panata’ or vow of sacrifice (In 2011, 24 Filipinos were nailed to the cross; the most number of crucifixions since the ritual started in 1950s). In 1965, the role players and the penitents were invited to perform the sacrifice outside the barangay, this time in Betis, Guagua. The occasion caught national interest and subsequently became an international tourist attraction. Through the years, Rolando Navarro passed on the family tradition he began to his son Ricardo and then to his grandson Allan Navarro who is the present director of the street play Via Crucis. Nowadays, more than 200 cross-bearers and some 3,000 “mandarame” (men who whip their backs with bamboo stick called “burilyos”) converge in Cutud’s Calvary every Good Friday.

The Philippines is Southeast Asia’s largest Roman Catholic nation with a rich cultural heritage that is steeped in tradition. One of these Filipino practices is the observance of Lent and the Holy Week that, for Catholics, is a time for atonement and sacrifice.For Filipinos in Pampanga, the observance is characterized by the senakulo or pabasa which is the chanting of the passion of Christ as read from a book that locals call Pasyon. Other penitents called magdarame (flagellants) carry wooden crosses, crawl on rough pavements and slash their backs before whipping themselves to draw blood, to ask for forgiveness of sins committed, to fulfill religious vows (panata), or to express gratitude for favors granted. On Good Friday each year, in the City of San Fernando, particularly in Barangay San Pedro Cutud, thousands flock to witness the world-renowned crucifixion that is reenacted on a man-made hill after two-hour street play, Via Crucis is performed as it has been done for the past 50 years. Contrary to the Catholic Church’s teachings and the commercialization of the event, the fervor for the tradition stays, with the townsfolk sticking to their faith and spiritual practice, constantly remaining pure in their panata which continues to be a source of community solidarity and strength. (Credit: www.cityofsanfernando.gov.ph)

Ruben Enaje, 50, a Kampangan and a painter, gets his hands and feet nailed to a cross every Good Friday for the last 24 years. He started doing this in 1986 after surviving a fall from a building. The nailing and convergence of flagellants, cross-bearers and street play reenacting the Via Crucis (Way of the Cross) all happen on a replica of Calvary on San Pedro Cutud’s Purok Cuatro in the City of San Fernando, Pampanga. Some 30,000 to 80,000 foreign pilgrims and spectators witness this Lenten event every year.

Where before men tied themselves to the crosses after bearing these for days, faith-healer Artemio Anoza began real-life nailing in 1961 or 1962 when he played the part of Christ in the staging of the Via Crucis mounted by Ricardo Navarro that year. The play, staged first in 1955 and solely in the village, is continued by Navarro’s grandson, Allan. (source: Phil Daily Inquirer, April 16, 2011, by Tonette Orejas)

ITINERARY FOR THE DEVOTEES:

Palm Sunday. Start your Holy Week with a Mass as this day – referred to as Domingo de Ramos – comes with the traditional blessing of palms and olive branches followed by a procession to the parish church with the parish priest taking the role of Christ on the way to Jerusalem usually accompanied by 12 men acting and dressed in the role of the 12 Apostles. Traditionally, on the street fronting the church stand kubu-kubuan — nipa stalls – where choir members sing hosannas and shower the priest with petals and confetti. The celebration ends with a Mass.

Holy Monday. Move around town to do the traditional Visita Iglesia or follow the Stations of the Cross.

Or one may visit, pray and meditate thru the life-sized sculptures of the Stations of the Cross (Banal a Bundok, Dalan ning Krus) in Marso Uno, Brgy. Ayala, Magalang, Pampanga. The hallowed walk thru the path of Christ was initiated by the kind-hearted members of Soroptimist Intl. – Magalang led by its President Marivic Paras and Flordelis “Bing” Feliciano as the project chairman. The project was made possible thru donations from friends and benefactors.

Holy Tuesday. Move around town to do the traditional Visita Iglesia or follow the Stations of the Cross. Continue around town (by barangay) to witness the ‘Pabasa’ (non-stop chanting of biblical verses in the vernacular) in different makeshift altars or Cenakulo (a theatrical dramatization of Christ’s passion translated from Spanish passion plays into the vernacular). Witness the procession of flagellants along the way heading toward a chapel for their final journey and moment of prayer.

Holy Wednesday. Move around town to do the traditional Visita Iglesia or follow the Stations of the Cross. Continue around town (by barangay) to witness the ‘Pabasa’ (non-stop chanting of biblical verses in the vernacular) in different makeshift altars. Witness the procession of flagellants along the way heading toward a chapel for their final journey and moment of prayer. The hermana mayor may serve snacks to those who have participated in the ritual and brought in the blessing of the Lord.

Maundy Thursday. Got to Mass as the day marks the observance of the washing of the feet of the apostles and the Last Supper. After the ceremonies, the parish priest and the apostles take their own supper at the parish rectory and partake of a meal.

Good Friday. Proceed to Brgy. San Pedro Cutud at 7:00 in the morning to witness the Via Crucis or Way of the Cross (a 51 year old street drama on the Passion of Christ written and performed by local residents). At 12:00 noon, join thousands of people to witness actual crucifixion of a host of 7 – 10 penitents. Or an optional visit to Brgy. Lourdes Northwest in Angeles City where another crucifixion takes place between 2:00 – 3:00 p.m. In churches all over, rites and ceremonies start shortly after noon with the Las Siete Palabras (Seven Last Words), homilies and meditation on the seven final utterances of Christ at Calvary, which end at 3:00 in the afternoon, traditionally believed as the hour of Christ’s death.

Black Saturday. Go shopping for Kapampangan delicacies, arts and crafts in San Fernando, Betis, San Matias and Mexico. Sabado de Gloria is highlighted by the evening Mass with the blessing of the fire and water as well as the renewal of the faithful’s baptismal vows.

Easter Sunday. At 8:00 in the morning, proceed to Sto. Tomas, Pampanga for a whole day festivity of religious events (salubong), street dancing (Sabuaga Festival), trade fair and variety shows including fireworks in the evening. Witness their Sabuaga Festival featuring a showering of petals on the image of the Virgin Mary. Petals and confetti will literally rain on the processional route around Poblacion, starting 2 p.m. as revelers join groups coming from the town’s seven barangays in street dancing. Or one may choose to go instead to any church to witness the most elaborate ‘Salubong’ at 6:00 in the morning (A traditional religious event which portrays the meeting of Christ and His mother, Mary, after the resurrection in an elaborate drama participated in by local residents dressed as angels and different biblical characters). The festivity usually culminates in a colorful fireworks display.