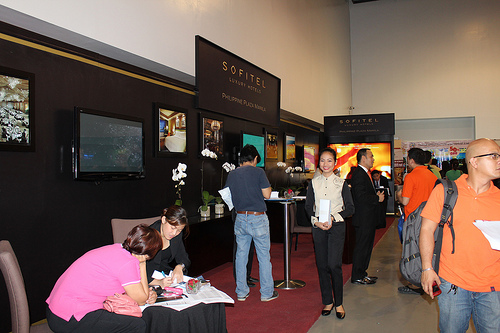 I was there at the Expo for three days straight and all I could say is that Philippine Tourism has never been this promising as before.   The expo was well organized and professionally presented. There were lots of new players in the travel and tourism world, some of them came from the various emerging destinations all over the country.  The placement of booths and the categorization of its layout were planned and well organized.  Foods and entertainment were carefully prepared and it seems that the organizers really know how to handle such a big affair.

Visitors were all excited to see the presentations and the expo exhibitors has to offer.  Big crowd drawers were the travel promos and discounted airfare rates from the various travel agencies and airline companies operating in the country.  The discounted tour packages and hotel rates from the big hotels and the new emerging destinations all over the country was also a big hit.  One thing I noticed though were the unmanned booths and those booths with their personnel who were just busy chatting to each other instead of introducing the services, tour packages/products to the various visitors in the expo.  Anyway, it is something that their respective companies has to address and In believe they lost a lot of opportunities in the expo.