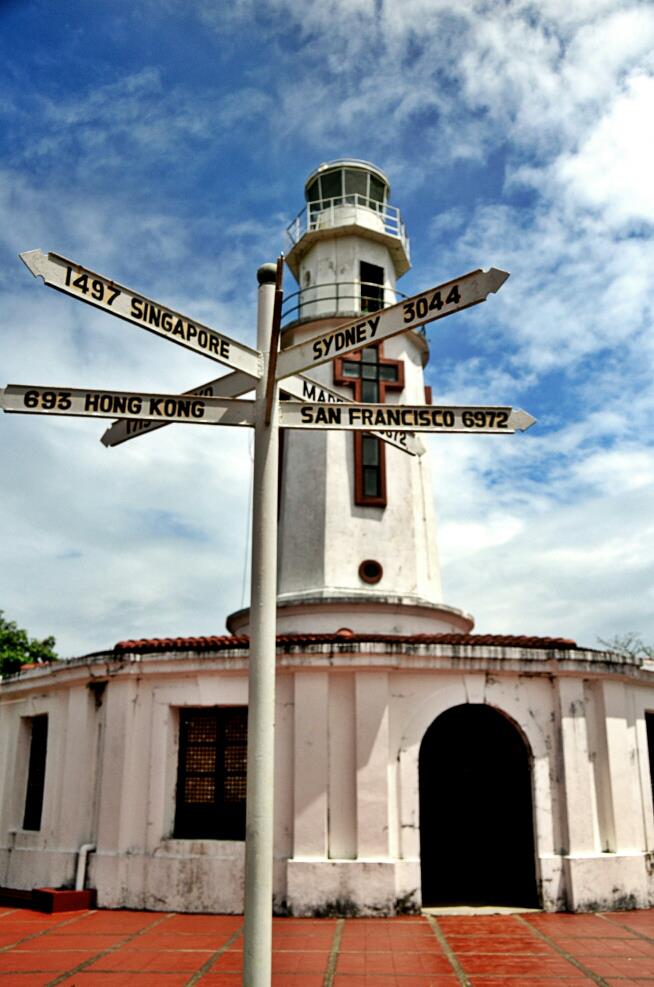 Corregidor and the other fortified islands of Manila Bay fall under the jurisdiction of the City of Cavite, Cavite province. Corregidor, also known as “The Rock” for its rocky landscape and the heavy fortifications, along with Caballo Island, about 1.7 km (1.1 mi) south, divide the entrance of Manila Bay into the North and South Channel.

The island’s biggest area, which points towards the South China Sea, rises prominently to a large flat area that is called the “Topside”. Beneath this was the fortified communications center of the island, as well as the location for the Army headquarters, barracks for enlisted men, a branch of the Philippine Trust Co. bank, the Cine Corregidor movie theater, officers’ quarters, underground ordnance shops, the traditional parade grounds, an Officers’ Club with a 9-hole Golf Course, tennis courts, and swimming pool, and the bulk of the batteries that constituted the strength of Corregidor.

Middleside is a small plateau that interrupts the upward slope from Bottomside to Topside, and was the location of 2-story officers’ quarters, barracks for the enlisted men, a hospital, quarters for non-commissioned officers, a service club, PX, and two schoolhouses—one for the children of Filipino soldiers and the other for American children.

Bottomside is the lower part of the island and is the neck that connects the tail and head of the island. South of Bottomside was Barangay or Barrio San José (near what was Navy Beach); on the north is what was Army Dock, with its three large piers, and, east of Bottomside, is the Malinta Tunnel. The Malinta Hill separates Bottomside from the Tail End.

The Tailside or Tail End is not a given name, but it is the remaining portion of the island where different memorials, shrines and the island’s airstrip are located. Kindley Field was constructed in the early 1920s and named in honor of an early hero of the U.S. Army Air Corps. The airfield was operated then by the army, and the navy had a hydroplane base. The short runway, cramped and hilly terrain had limited its use.

Corregidor and Caballo islands are remnants of a volcanic crater, the Corregidor Caldera, which was last active about one million years ago. However, the Philippine Institute of Volcanology and Seismology still classifies Corregidor as a potentially active volcano.>

Within the Province of Cavite, Philippines in accordance with American Governor-General Cameron Forbes’ Executive Order No. 124 dated December 3, 1909.

Presently administered, managed and maintained by CORREGIDOR FOUNDATION,INC. (CFI), a non-stock and non-profit organization created and mandated by DOT/PTA under PTA Board Resolution No. B-7-87 dated February 06, 1987 and registered with the Securities and Exchange Commission (SEC) in October 1987 (SEC Reg. No.145674).

To the left at the entrance to the Pacific War Memorial are the ruins of what used to be Cine Corregidor, a movie theater. It was erected during the pre-war period to cater to the entertainment needs of the personnel of the garrison as well as their families. Nothing much is left of the building except portions of its concrete walls, a stairway leading up to its upper balcony and the concrete floor of what used to be its stage.

Once used as quarters by American officers, the three-deck, hurricane-proof concrete building is reputedly the world’s longest military barracks. Because of its great length of 1,520 feet, it is commonly known as Mile-Long Barracks. The headquarters of Gen. Douglas MacArthur was also located in the building.

CENTER OF THE ISLAND >

Completed in 1913, Battery Way was armed with four 12-inch mortars which are capable of firing 360 degrees up to a distance of 14,610 yards, in any direction at the rate of one round per minute per mortar. This battery provided an effective means of countering the Japanese artillery in Bataan. Three of the serviceable mortars opened fire on April 28, 1942 and on May 02, 1942, two of these were hit. After more than 12 hours of continuous firing the remaining mortar finally froze tight on May 06, 1942.

This 12-inch seacoast gun with a maximum range of 29,000 yards was capable of firing in all directions, it was one of the last major additions to Corregidor’s defense system, designed to frustrate naval threat from the China Sea. Battery Hearn had been in action firing towards Cavite from February 1942 and on April 08-09,1942, towards Bataan. Captured nearly intact and later repaired by the Japanese. Battery Hearn was completely neutralized by American aerial bombardment in January to February, 1945.

Armed with two 10-inch guns mounted on disappearing carriages and located in the west central part of Corregidor. This gun emplacement was intended to fire to the northwest. At the start of the World War II the battery was not originally manned. It was put into active service in early April 1942 but was quickly knocked out of service and subsequently abandoned.

One of the six “disappearing” gun batteries that formed the interlocking field of fire, which totally encircled the island. Battery Crockett was armed with two 12-inch seacoast guns mounted on disappearing carriages behind a concrete parapet. These guns ranged to 17,000 yards and were capable of 170 degrees traverse with overlapping fields or a total 220 degrees coverage for the battery.

With a maximum range of 14,610 yards, Battery Geary was capable of firing in any direction. The eight 12-inch mortars of this battery were considered the most effective anti-personnel weapons of Corregidor, together with Battery Way. A direct hit by Japanese artillery on its center magazine totally destroyed Battery Geary on May 02, 1942.